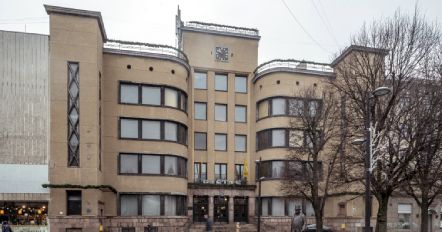 Almost a full century stands between us, and the First Lithuanian Republic. It may seem like a very long time, and every monument that reminds us of that period is often seen as an outdated relic. The Central Post Office building, however, still stands as a perfect example for understanding the backstory of Lithuanian modernism.
Most of us understand the post office as a place where one goes to post or retrieve letters and parcels, a part of everyday life. But the building that opened its doors in the centre of Kaunas back in 1931, was designed and built to tell its visitors a much more complex and meaningful story. It epitomises the strive to connect traditional Lithuanian symbolism with modernist architecture standards. Its architect, Feliksas Vizbaras, is still considered as one of the grandmasters of this very peculiar style. The expression of national cultural heritage are still visible in the window frames or finishing materials of Lithuanian origin, easily recognisable in the patterns of tile floors in the entrance and the main hall, which remind of a hand-made traditional linen towel.
The modern aesthetics of the building – a flat roof, an unusual general shape with large windows – weren’t of everyone’s liking back at the time when it was inaugurated. However, no one dared to question the building’s status, as a standard for all modern institutional buildings. Its floors were connected by an elevator for visitors and for mail, the main hall was wide and equipped according to the latest standards, an electric clock hung proudly on its forefront, while its employees’ working conditions would still be envied by many of today’s civil servants: employee showers, wide offices, an employee restaurant and hairdresser’s salon, and a rooftop terrace for breaks.
Although its importance has nowadays slowly diminished, this building still stands as a prime landmark in the Laisvės avenue and a meeting place for the city’s inhabitants, who still keep saying: “let’s meet in front of the post office!”