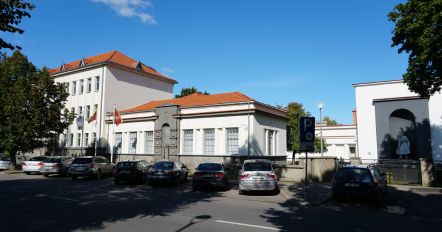 The station was built in the former territory of Kaunas`s fortress. It is a complex of several constructions and engineering installations. The main water reservoir is a transformation of the former gunpowder depository. Frame arches of reinforced concrete and double walls and floors enable the reservoir`s constructions to with-stand high water pressure. on the outside the low, elongated, monolithic expanse is enlivened by a rhythmic colonade performing not just an aesthetic function but also bracing the wall. Higher up inside the pavilion of valves is decorated by the sculpture Water Carrier (Bronius Pundzius). Close to the street there stands a three-storey residential and administrative building, next to it there is a diminutive, decorative hydrofor (water pump). On the other side of Aukštaičių street were three open basins intended for water let out from reservoir during cleaning operations. The water from these basins as well as other Žaliakalnis effluents were collected in the sewage system`s main container, installed under the Kaukas Stairway (1936) connecting Žaliakalnis with Naujamiestis. In the lower terrace a fountain was installed. The broad steps of hewed granite, embellished with decorative plants around them, were the loveliest in Kaunas, and the area around the basins became favorite resting places. Towards the end of the war some of the installations were bombed. Instead of three basins one was reconstructed.