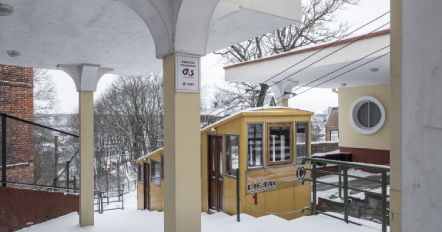 Žaliakalnis Funicular is a funicular railway in Kaunas. Built in 1931, it is the oldest funicular in Lithuania and is among the oldest vehicles of such type in the world still operational. It was constructed by engineering firm Curt Rudolph Transportanlagen from Dresden, Germany with electrical equipment from AEG and mechanical parts from Bell Maschinenfabrik, Switzerland. The official opening was on 5 August 1931 with one passenger car, while the second car was only a platform ballasted with stones used to counterbalance the passenger car. The electric overhead power cable and the pantographs of the coaches are only used for lighting and heating of the cars. The upper station housed the electrically driven funicular mechanism in the basement, whilst the lower end of the line did not even have a shelter until 1932. The funicular succeeded and became very popular transportation for the city inhabitants and guests. It is known that about 5 million passengers were moved using it between 1950 and 1970.