House of painter A. Žmuidzinavičius 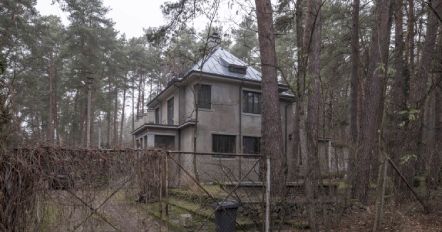 “Vita” is a Latin word meaning “life” in English. A somewhat unusual but inspiring name for a house standing somewhere in a pine forest and inspired by the city’s modernist architecture. It was a place inviting to relax from the bustling city and to greet the peace. Villa Vita, built in 1934, was the first brick villa in Kulautuva.

“I remember how numbers of honorable guests from Kaunas were coming here by car on weekends. There were about thirty cars near the villa sometimes. Officers, people from the government. The entire higher class of that time.” Memories of Balys, a resident of Kulautuva. 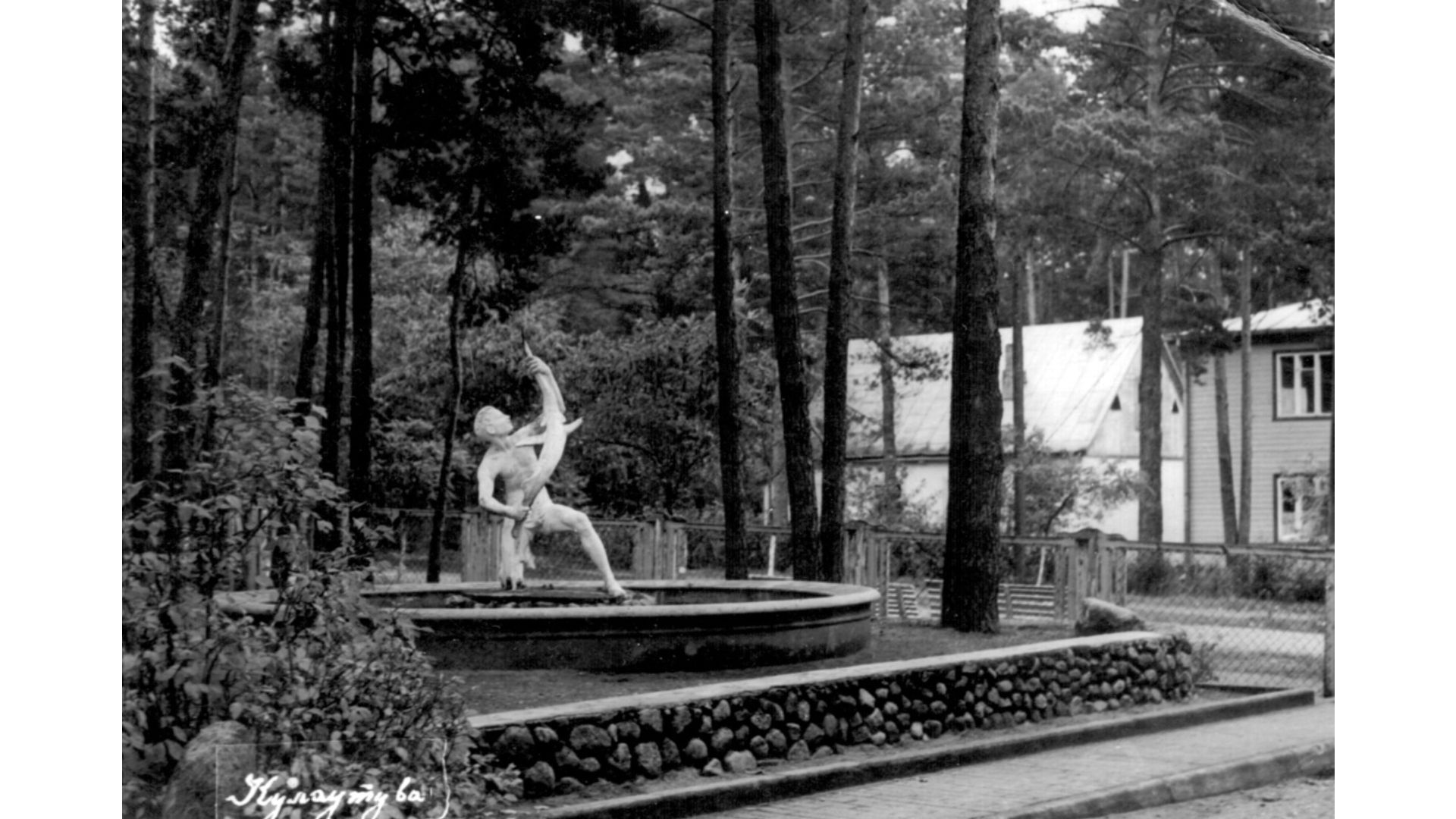 Fountain “Fisherman with a sturgeon” near the villa, 1952. From a private archive of B. Jasiukonytė-Adomaitienė.

The villa belonged to Romanas Polovinskis. He was the co-owner of the successful construction company “Mūras”, participated in the activities of the Lithuanian Entrepreneurs’ Union, and was the chairman of its board. Polovinskis loved and cherished modernist architecture. He also owned a villa built in 1927 in Kaunas and one of the most beautiful modernist style buildings of architect Arnas Funkas, that was built in 1932 at the intersection of K. Donelaičio and Gedimino streets.

“At that time, villa “Vita” was a luxurious building. Also, it was one of the first with a paved sidewalk – it was a miracle for children.” Memories of Aldona, a resident of Kulautuva.

Near the villa Polovinskai installed a cafe, with a wooden terrace that was designed along the pine forest in 1938 by the engineer-architect Antanas Varnas. During summer afternoons a string orchestra played at the café, and couples danced. Romanas Polovinskas also owned a hotel next to villa. Profitable business gathered the entire family in Kulautuva. Polovinskai were descended from here, so this resort has always been a gathering place for the familly. 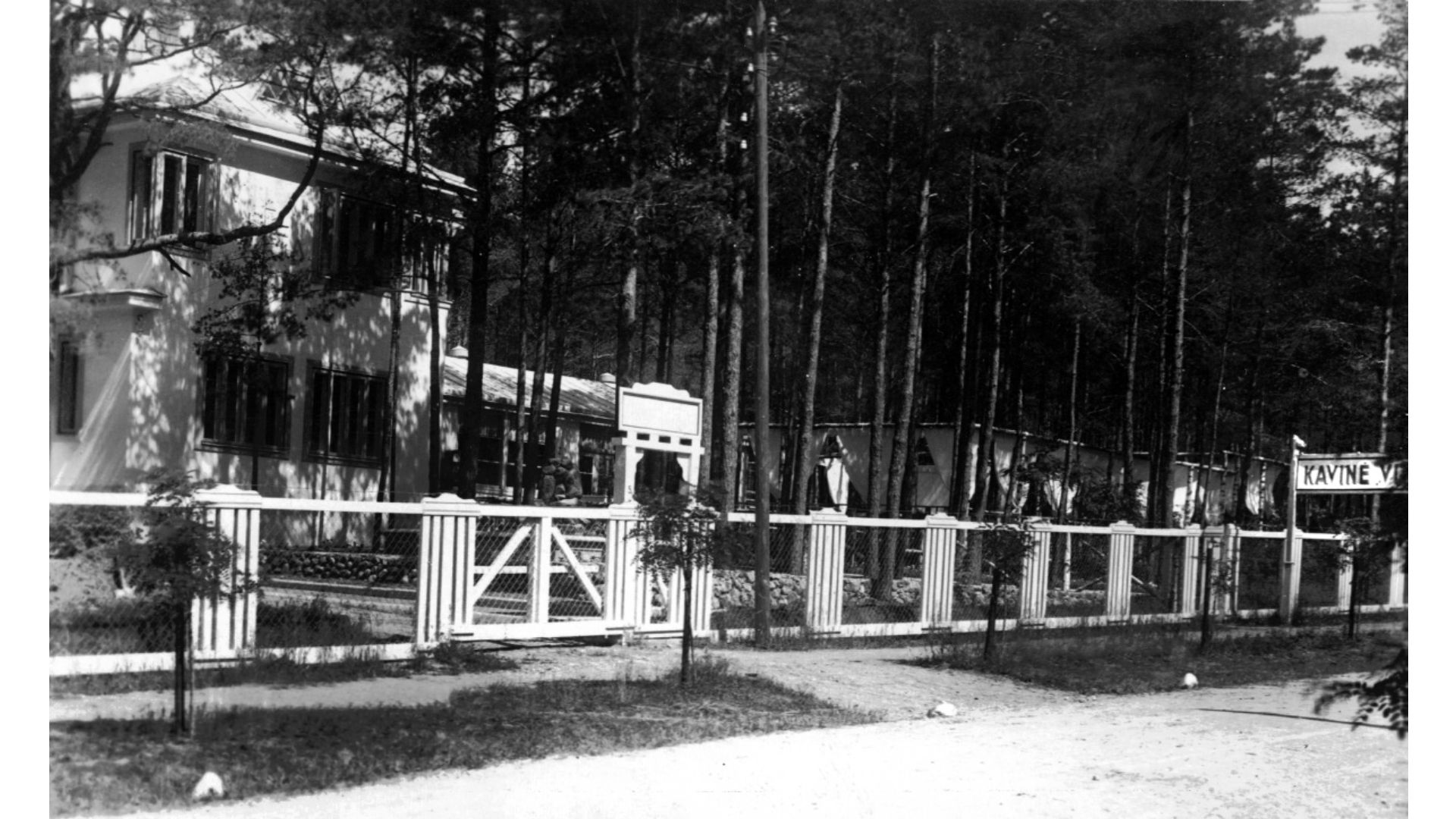 From a private archive of Adomas Miliauskas, 1938.

“In Kulautuva, an officers’ orchestra played near the villa. For me, it was the most beautiful. There was a fountain and a tennis court near the building. There was also a fenced land plot in the territory of the villa with a roe deer inside.” Memories of Albina, a resident of Kulautuva.

After the Soviet occupation, Romanas Polovinskas and his wife Nina emigrated to America. The villa was given to the tuberculosis sanatorium. Today, it is surrounded by silence and only a mossy fountain reminds us of the rich past.