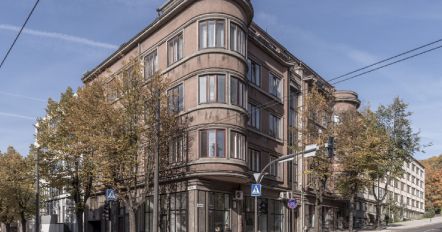 The first millionaire in the family

Polovinskas is an old family of Kaunas. During the years of national revival and independence, it was known for its public and political activities. During the World War 1, a large part of the family ended up in the depths of the Russian Empire. It became possible to come back to Lithuania only when it recovered its statehood. Romanas Polovinskas was born in 1894. When the front reached Lithuania, he fled, and returned back with the help of his brother at the age of 28 in 1922.

It is a family that during different stages of its life demonstrated efficacy, entrepreneurial skills, new ideas turning into sources of income, but Romanas who managed to become the family’s millionaire was the one who embodied this family’s entrepreneurial skills. The business empire of young Polovinskas started in 1923, when together with Pranas Urbonas, they started a construction company Mūras. Just like real estate, construction business back then was a real gold mine. This was determined not only by the fact that the country had to create its infrastructure, but also because the construction struck Kaunas, temporarily stopped only by the Great Depression, a global economic crisis. At the course of time, both the construction company and Romanas himself occupied an important place in the Lithuanian business world. For some time, he was even “the chairman of the Lithuanian Businessmen Union that cherised the national spirit of the wealthy” (B. Gailius, Šeima tarpukario Lietuvoje: Polovinskai. Naujasis židinys-Aidai, 2011/6).

After making a fortune, the businessman built a large house at the city centre in 1932. It seems that the status of the owner of the house and his approach to innovations was a natural reason to select the author of the project: the building of expressive and plastic architecture was designed by a modernist famous for its unique style, Arnas Funkas. The luxurious building had a two-part garage in a private courtyard and a lift. The premises on the ground flood were exceptional because of their large showcase windows and were dedicated to commerce: it was planned to use the premises for a hairdressing salon and two stores. One of them was rented for a long time to a student company Studentai. There was also

an editorial office of a weekly paper Sekmadienis. The media of that time soon started referring to the house as “the Palace of Contractor Palavinskas”. He lived here himself with wife Nina and other members of his large family. Two apartments were designed on each floor of the building, with six and four rooms. Small rooms were installed in the attic as well. The house also served as the office of Mūras company itself. After the Soviet occupation, the owner and his wife moved to West. He died in 1966 in the United States of America.