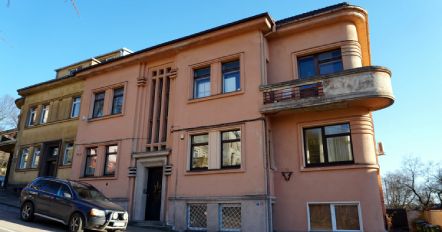 It is an interesting complex of two residential houses designed and built by the same architect at the same time. Their value is created not only by the expressive architecture, but also by its hilly location and the corner of the streets, under which the contours of buildings are waving. (Kaunas, 1918–2015. Architektūros gidas. Vilnius, 2015). All this is the merit of the promising interwar modernist Arnas Funkas. And while the house of Stasys Stašys is a bit more restrained, its lifelike balconies, the corner of the building and the rides keeps it alive.

In addition to these attached buildings, not only the architecture, but also the duties of initiators of construction is what connects them both. Although they are not a family members, they were two significant inter-war officials of Lithuania – Jonas Norkaitis and Stasys Stašys. The latter, the owner of this house, was the director of the General Audit Department of the State Control. Both luxury homes were representing the status of these statesmens.