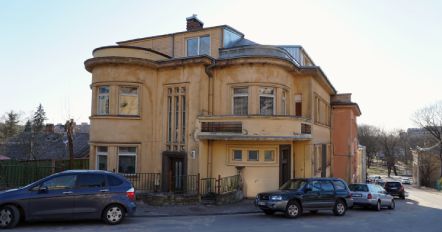 It is an interesting complex of two residential houses designed and built by the same architect at the same time. Their value is created not only by the expressive architecture, but also by its hilly location and the corner of the streets, under which the contours of buildings are waving. (Kaunas, 1918–2015. Architektūros gidas. Vilnius, 2015). All this is the merit of the promising interwar modernist Arnas Funkas. In addition to these attached buildings, not only the architecture, but also the duties of initiators of construction is what connects them both. Although they are not a family members, they were two significant inter-war officials of Lithuania – Jonas Norkaitis and Stasys Stašys. Both luxury homes were representing the status of these statesmens.

Jonas Norkaitis is an inter-war Lithuanian economist and diplomat, a long-standing and influential statesman, which was actively participating not only in the domestic politics, but also in international negotiations. In 1919 he came back to Lithuania from St. Petersburg. He was 27 years old when he started to work as the head of the Jurbarkas and Virbalis customs offices. In 1923 when Klaipėda region was connected to Lithuania, he was appointed as a representative of the Ministry of Finance of Klaipėda Region and Klaipeda Customs Head. In 1925 J. Norkaitis moves to Kaunas and till construction of his own house in 1935, he heads the Department of Commerce of the Ministry of Finance. J. Norkaitis’ curriculum vitae shows a number of memberships in the activities of economic organizations – he contributed to the establishment of AB “Lietuvos cukrus” (Lithuanian sugar), was elected as its chairman, and also belonged to the Economic Commission of the Lithuanian Energy Committee.

J. Norkaitis’ later works varied between economy and diplomatic affairs. True, not all of them were pleasant and easy. Since 1936 J. Norkaitis was appointed Head of Delegations for numerous Economic Negotiations with Foreign Countries, and in 1939 became a member of the international negotiations with the Soviet Union, after which the Lithuanian-Soviet Union mutual assistance agreement was signed, which in fact led to the occupation of Lithuania in 1940. Unfortunately, like many government officials who invested in real estate and their homes in the 1930s, the Norkaičiai family did not enjoy their home for long. As in most cases, only the directions of destiny were different – soon after the occupation, some roads led to Siberia, others – to the West. In 1939 J. Norkaitis left this house to Moscow to negotiate, but already in the summer of 1940 with all his family he was forced to retreat to Germany.