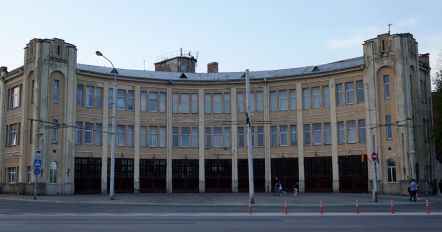 The location of the building was determined by its proximity to a source of water, the Nemunas River; and its curved facade was dictated by the need to have space for fire engines. The main curved part of the building contained the garage bays; above them were the fire-station offices and rest areas; the third storey housed the Pedagogical Museum. Other small buildings were situated around the interior courtyard. The Nemunas street wing had a store on the first floor, an apartment on the second, and a pawnshop on the third. The curbed part of the building is framed by small towers whose purpose is compositional rather than functional.