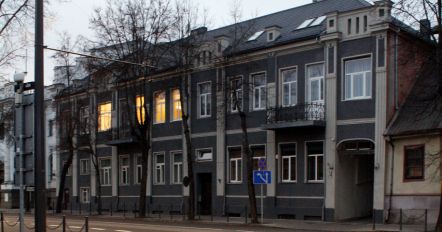 Authors of the project: M. Segalovskis and B. I. Blochas

Marta Engelman started building a two-storey brick house designed by Moisijus Segalovskis in 1911, having bought a parcel of land with the property from its previous owner Antanas Rabašauskas. In 1912, the house was already occupied and rented out. When it was built, the buildings closed off an inner courtyard, which was then accessed via an entry point and a garden. After the declaration of independence in 1919, the house was purchased by Abraham and Ida Kacai, who owned it until the 1940s.

As the city became the capital of the country, several public institutions started setting in surrounding streets. During the reconstruction of K. Donelaitis Street in 1931, the face of the house changed one more, and the last, time. Interestingly, this change was partly, if not entirely, related to the street improvement works. The work involved excavating some of the soil and lowering the street, therefore, the foundations of nearby houses went down as well. Moreover, the walls started to crack, which led to the need for additional reinforcement of the foundations. Furthermore, in 1931, the final adjustments were made to the facades of the house according to a design by B. I. Bloch: the western part of the house was raised (the house became asymmetrical) when a first floor was built up, the staircase doorway was moved down, and an empty space was used to install a skylight.

Conveniently located in the city, the newly renovated house did not escape the eye of the diplomatic missions: from 1928 to 1939, the two second-floor apartments were rented to the Apostolic See or the Vatican Nunciature. Thanks to the splendid state palaces and banks built between the two world wars, today the building looks a little less impressive, but it without a doubt remains an important part of the diplomatic legacy of Kaunas. Dignitaries of the Holy See and the Lithuanian state visited and worked in the building, including representative of the Holy See to Lithuania, Prelate Luigi Faidutti (buried in the Cathedral Basilica of Sts. Peter and Paul in Kaunas), representatives of the government of the Republic of Lithuania, diplomats, and the clergy. In 1931, a modern villa was built on the adjacent V. Putvinskis Street, the first building designed specifically for a diplomatic mission. The Vatican Nunciature was just about to move in with its new envoy Riccardo Bartoloni. Unfortunately, due to a change in political circumstances, the nuncio never moved in, and the building was turned into a children hospital.

What is more, the building is a representative of the moderate modernist style that is a rare thing to find in Kaunas. The facade of the building has been recently renovated, with a darker and rougher sand and lime plaster on the wall planes and lighter coloured detailing. Unfortunately, the fence and vases that crowned a roof have not survived to this day. However, the authentic staircase and doors have been preserved, as well as the original layout of some of the apartments, parquet flooring and windows. In 2007, on the occasion of the 80th anniversary of the Concordat between the Holy See and the Republic of Lithuania, a commemorative plaque was unveiled on the building. The community is currently seeking to have the building added to the list of cultural assets to be protected.

Greetings to Rita, the resident of the house for collecting and sharing the information!