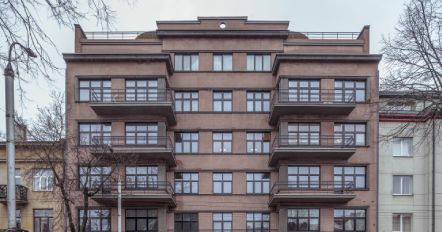 Routes: “The Skyscrapers of Kaunas“

“Lincoln” car ran through the gates of huge house on Kęstutis Street and turned into the yard. There was a small two-storey house with a garage on the ground floor.

– This house is ours, – Kazys showed a mass of big house waving his head. There should be, five floors, I was lazy to count. On the other hand, what’s the difference for me?” (V. Sirijos Gira “Raudonmedžio rojus”, 1972 m.)

The benchmark for modern and luxurious construction

Over ten thousand new buildings were built in Kaunas during the twenty years of inter-war independence. Modern multi-storey residential houses – a sign of prosperity in the capital – started to germinate in the center of Kaunas. These new houses had to meet new hygiene and construction requirements – more light in the rooms, no houses were allowed, where the maid’s rooms are dark and without windows, and all four-storey and larger buildings should offer elevator. House of J. Lapėnas not only met all these requirements, he quickly became a luxury benchmark and was named one of Kaunas “skyscrapers”.

The house belonged to the director of “Maistas” – the largest food processing company, which had a monopoly on export of meat products in the country – Jonas Lapėnas. Already at the age of 13, a self-taught “seller” has been selling at the Pumpėnai shop. Although he did not complete his studies, it did not prevent him from becoming a famous and active person. Being a member of an active political movement, and since 1929, as its chairman, J. Lapėnas has contributed to the establishment of the Lithuanian Nationalist Fund for providing loans and scholarships to gifted but poor young people. The energetic economist was also the chairman of the management of “Lietuvos muilas” and “Lietūkis” companies. Among the areas of interest of the entrepreneur were the press and culture – he was one of the founders of the publishing company “Pažanga” and theater “Vilkolakis”.
In 1935, J. Lapėnas was accused of financial misuse in “Maistas” company and was sued. Entrepreneur was sentenced to 8 years of imprisonment in Kaunas heavy duty prison. The paradox of destiny – the prison building was under the windows of his own house – both on Kęstutis Street. Later, the Court of Appeal annulled the verdict for the entrepreneur, but J. Lapėnas did not hear the final decision – acquittal died in 1937.

The house described in a novel

The house was distinguished by luxury, created by quality finishing materials and quality of work. There were even two elevators in the house, but only one of them still remains in our day. From 1938 to 1939 Polish Embassy rented the apartments in the second floor. The building of exclusive architecture also fell into the pages of popular literature, it is featured in the famous novel “Raudonmedžio rojus” (“The Mahogany Paradise” by V. Sirijos Gira). After the nationalization of the building in Soviet times, it housed the dormitory of the Agricultural Academy, and later the research institute. The legend of the house is still alive today – so far, local Kaunas people still call this house in the name of Lapėnas. In 2019, the reconstruction of the building was completed. Today, the building is housed by young and active businesses and the owners cherish its unique history.

Interview with D. Vaitiekūnas – administrator of the building