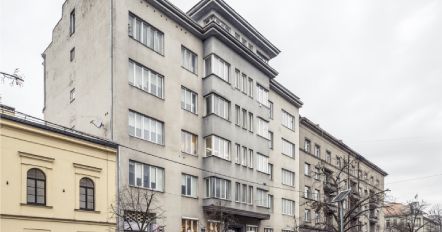 To counter the effect of the tzar’s interdiction to erect buildings with more than two floors in Kaunas, new legislation was passed after the country regained its independence. To purposefully destroy the flattish city’s landscape, and to model Kaunas after the examples of Europe’s capitals, it became forbidden to erect buildings with less than three floors around the Laisvės avenue and the Vytautas boulevard. Some rose even higher. When the Chaimsonai’s private residence was completed, on the Maironis street in 1930, the new building was met with sincere astonishment by the city’s residents. As the rest of the neighbourhood didn’t commit to the building’s owners race for new heights, this condo building remained unchallenged in its category in interwar Kaunas.
The building, albeit anecdotally, was immortalised in literature. The main character of Vytautas Sirija Gira’s novel “Mahogany Paradise”, Karolis Tuleikis, mentions this giant in the following terms: “One way or the other, the house where I lived was, in 1935, Kaunas’ skyscraper. The only things that were higher back then were the churches’ towers and the former town hall – the White Swan.”