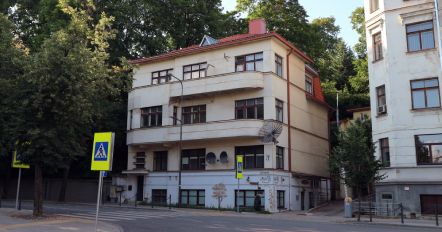 Different faces of one house

This is the place where Putvinskis Street begins or ends. Depends on which side you are going. That is why this house not only meets but also sees off every passenger walking down this street with a tone. And this street sounds great – it combines a range of wonderful architectural pieces into a single composition. Famous public figures, businessmens, doctors, lawyers built houses in this prestigious quarter between the two wars; The premises were leased by a number of foreign representations. Each of the building is a different work of famous Lithuanian architects of that time. We will not find one dominant here – all are joined equally in this architectural ensemble.

V. Tercijonas bought this landplot in already built up site in 1933. Global economic crisis in 1930`s, or other reasons may have caused the building permit to be issued only in 1936. After all, the house was designed by young and famous architect B. Elsbergas, who created somewhat unusual for the place – a house with two different faces. From the street, it looks like a modern urban cottage, but deep inside the yard it looks more like a brick farmhouse hiding in the rich foliage of the Žaliakalnis Slope.

Life on the street with the Father’s name

It is impossible to describe this house without mentioning both of its hosts, active public figures Vincas and Ona Tercijonai. Vincas Tercijonas – was a Lithuanian pediatrician and public figure. He graduated from Universities of Warsaw and Moscow and finished all of his studies in 1916. Soon after he started medical practice, working as a doctor of the Russian Army. In 1921 he returned to Lithuania and joined Lithuanian Armed Forces, combining his work as a military doctor and private medical practice at home in Putvinskis Street.

His wife, an educator and public figure, Ona Putvinskaitė-Tercijonienė, was no less a “militant” woman. When in 1919 her father V. Putvinskis founded the Lithuanian Riflemen’s Union, Ona had just graduated. According to the union’s statutes, both men and women could be a riflemen, so Ona became a member from the early days of the union. When the Poles conspired against the Lithuanian state, the Ona helped to eliminate it by reconnaissance, decrypting some secret documents.

Sanitation, hygiene, farm affairs, writing articles for magazines “Motina ir vaikas”, “Trimitas”, “Šaulė”, collecting donations, organizing courses and camps, working in kindergartens, educating future riflemens and their teachers were all Ona`s merits. She even went to Berlin to deepen her knowledge, and with her activism she strengthened the union significantly. Later she became the leader of Kaunas Women’s Riflemen union and a member of the National Riflemen’s Committee.

Ona Tercijonienė really had something to be proud of – not only she made the active stand out in the state life, but she also lived in the street named in honor of her father, the founder of the Riflemen’s Union. In the turmoil of the war, both Tercijonai retired to the West, but even there they were active in Lithuanian expatriate organizations.