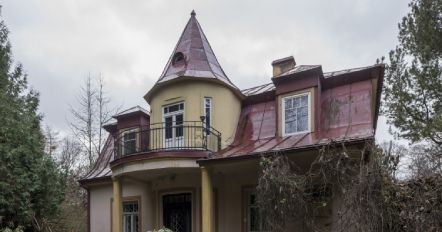 Obelynė is one of the most famous places that reminds us of Tadas Ivanauskas (1882–1970). And we do not have many of such places. Is easier to count them rather than name them, and one can get lost in the endless list of merits and interesting biography facts that the famous professor of nature left behind. His legacy connects the generations and lurks almost behind every corner. His memory is immortalized by a new genus of insects called Ivanauskella in his honour.

To comprehend something that is boundless: these are a few words to describe the prominent personality of Tadas Ivanauskas (1882–1970). And it is made exceptional by all the quests that can barely be contained in one biography, resplendent because of various colours of the life of this scientist. Tadas Ivanauskas was born in Lida region, Lebiodka manor house, the current district of Voranava, at the place, where Lithuanian, Polish and Belarus nations meet. His ancestors were noblemen occupying important positions in the Grand Duchy of Lithuania.

He attended a gymnasium in Warsaw, where everyone “Immediately noticed my incorrect Polish language, and especially my pronunciation, mocked and mimicked my speech and how I tell words. (…) I was called names like many other students: at first, they called me bocvina, because the Poles were convinced that Lithuanians do not eat nothing better than batvinis (beetroots).” The young man did not manage to blend in and was driven out, so he completed his studies in Saint Petersburg. Feeling inclination towards nature since he was little, he chose his studies accordingly, and started studying in Saint Petersburg, but because of the revolution, he had to terminate his studies for the second time. Encouraged by his father, he continued his studies in the famous Sorbonne University in Paris.

The shift of Tadas Ivanauskas from the Polish environment towards the Lithuanian one was affected by his father’s views. However, the young Ivanauskas generation who grew up at the intersection of nations, had to choose from three emerging national countries. Two brothers got involved into the national Polish movement, another brother contributed to the national revival of the Belarus nation, whereas Tadas learned Lithuanian, returned to his native land after the war and together with his wife Honorata, established and funded a Lithuanian school in Musteika village.

Pioneer in natural sciences and environmental protection, also… a hunter

The path chosen by T. Ivanauskas brought him to Kaunas in 1919. While the fights for Independence were still going on, he became a member of the Lithuanian Riflemen’s Union and fought against the Poles in Merkinė lands and when the process of creating the state has started, he became involved in the creation of the University of Lithuania. He contributed a lot, organising various nature’s research centres that have not been established before: Nature research station in Kaunas, dedicated to collecting and storing samples of Lithuanian flora and fauna, Museum of Zoology, that started from a collection from the live natural specimen and stuffed animals brought from Lebiodka Manor in wagons. Because of love and attention to birds, Ventės Ragas Ornithological Station was established in Ventė

Cape in 1927, dedicated to observation and research on bird migration. In 1937, he established a Žuvintas Water Birds Natural Reserve that amazed him for years, and finally, in 1938, he established a Zoo in Kaunas. He initiated Bird Days and Tree-planting celebrations that became traditions. During them, with the orchestra playing, trees were planted on the slopes of Petrašiūnai, Panemunė, pine woods of Lampėdžiai, and slopes of Nemunas.

According to the contemporaries, biology had not been taught before Ivanauskas. He had to create the entire Lithuanian terminology of biology, which prior to that time was entirely Latin. At the university, lectures by the professor were attended by crowds of curious people from various disciplines as well as the city residents. During the lectures, not only one could hear various interesting facts about the rich natural world, but also about professor’s adventures during twelve scientific expeditions to Norway, Estonia, Brazil, Turkmenistan, Azerbaijan, Kazakhstan, Tajikistan, next to Ob and Volga rivers and the Adriatic Sea.

While an active natural explorer and environmentalist, T. Ivanauskas was famous as a passionate hunter and a sharpshooter. In 1924, he and Kipras Petrauskas were even the candidates for the London Olympics. How did those two seemingly completely opposite poles could be contained in one person? Throughout his entire life, professor set an example and improved the hunting culture, raised awareness about hunting that does not upset the balance. He was in charge of the “Society of Corrent Hunting and Fishery” and was an editor of the “Hunt” journal. While hunting around Kaunas, the professor was amazed by the Obelynė hollow, with crabapple trees in full bloom surrounding it.

A homestead that caught the eye

Being a nature enthusiast and descendant of noblemen, Tadas Ivanauskas had a dream to have a country manor, surrounded by a park of decorative and exotic plants. In 1920, he purchased an 8-ha land lot next to Kaunas, built a house, farm buidlings, established a garden, arboretum and a dendropark. It is like an open-air exhibition of decorative and exotic plants, collected from various places of the world during professor’s travels. The house built on the bank of Nemunas River was famous a centre of science and culture, visited by a lot of intellectuals of that time: writers, poets, painters, researchers and other notable public figures. There are over 300 various species of rare trees and bushes. This is the place, from which professor would travel to work in Kaunas.

Currently it is a museum, where one can see authentic furniture, various publications by Professor Ivanauskas, his manuscripts and moments of his life captured in photos. The homestead has been used for student educational practice and research work ever since. Kaunas District Museum, Botanical Garden of Vytautas Magnus University and Aleksandaras Stulginskis University, Kaunas University of Applied Sciences, Babtai Institute of Horticulture and public organisations, it is planned to renew the Apple tree garden planted and bred by Professor Ivanauskas, clear the park and create educational programmes that will reveal the uniqueness of Tadas Ivanauskas Obelynė Homestead and valuables stored in its museum.