Congregation of Sisters of St. Elizabeth 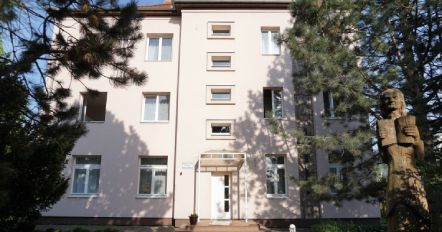 After World War I Z. Smetoniene, wife of President A. Smetona, invited sisters Elizabeth to arrive in Kaunas from Karaliaucius. Three German sisters S. Masalina, S. Gerarda and S. Teresa arrived in 1925. They stayed at sisters Benedictines’ and started to take care of patients at home, cared for poor people. Over time Lithuanian girls started to enter this Congregation. Although the number of sisters was just 15 but two subsidiary offices were established. One was in Jurbarkas where sisters had an orphanage; the other was in Švėkšna, where S. Bonita was building a hospital. Sisters worked in St. Luke hospital in Kaunas.

In 1931 Jonas Mačiulis-Maironis’s sister Marcelė Mačiulytė presented the Curia of Vilkaviškis Episcopate with a site (now on Pabrėžos St.). At the end of 1939, the three-storey Congregation Convent of Sisters of St. Elizabeth was built (architect Karolis Reisonas).