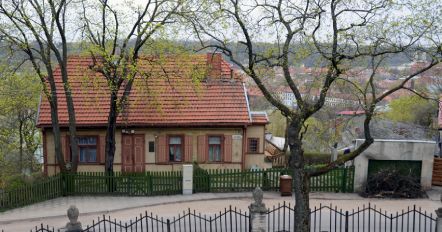 The museum was opened on November 18, 2001 to honour the 120th anniversary of the birth of the sculptor J. Zikaras. J. Zikaras built this house and lived in it with his family –  his wife Anelė Tubelytė-Zikarienė, and their 4 children – Vaidutis Zikaras, Teisutis Zikaras, Vainutis Zikaras and Alytė Zikaraitė. The four residential rooms of the museum consist of the living room, A. Zikarienė room, the dining room and J. Zikaras work room. Furniture from that period is shown in the living room. The works of J. Zikaras and his son T. Zikaras are shown on the walls inside. Photos, reflecting the life of J. Zikaras and his family, are displayed in A. Zikarienė room. The dining room has remained very similar to what it used to be: a round table, a cupboard and chairs. On the walls here you will find works by J. Zikaras as well as the paintings by his close friend Jonas Mackevičius, and the plaster sculpture “Linen” by Teisutis Zikaras. The original furniture – the work desk and the chairs – can be found in the work room. The studio downstairs consists of three rooms. The sculptures and their shapes, made by J. Zikaras, are displayed in the first room, together with examples of coins, made during the interwar period. Sculptures which were displayed in the first Lithuanian exhibitions are found in the second room. A model of the “Liberty” sculpture, some busts and reliefs of the well known Lithuanians are exhibited in third room.