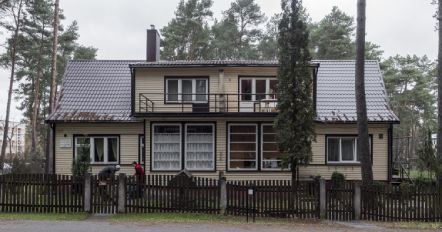 The writer’s house in Kačerginė

A small resort town of Kačerginė, still preserves the memory of the man that we call a classic of Lithuanian literature today. Writer Vincas Mykolaitis Putinas discovered Kačerginė in the late years of his life, when from 1961 he spent his summers here with his wife. Today, on a street named after him, stands a two-story house, planked with yellowish wooden tables.

Emilija Kvedaraitė Mykolaitienė – the poet’s wife, a woman who, according to some memories, may have been the last drop to push Vincas to change his lifestyle. She was strong, self-confident woman. The responsibility for the establishment of the summerhouse in Kačerginė was also placed on her shoulders. At first, there were thoughts to choose Kulautuva as the place for the house, but large trees covering the sun encouraged couple to look for another place. That’s when Kačerginė was discovered.

Emilija also had to take care of the construction woks herself:

“I drove to Pirčiupis myself by truck to buy wood – I got it from the locals. The wooden house of my sister’s family Balčiūnai was brought.”

It was agreed to divide a new house in half – half for Mykolaičiai, half for Balčiūnai families. The construction was completed in three years.

Finally, the time has came to admire the pine trees supporting the sky and to breathe in the fresh natural air. In his diary, Vincas Mykolaitis Putinas wrote:

“I am glad to have a house here in Kačerginė, where I can spend the summer season. I have everything I need here – loneliness, peace, dry pine forest, and all the good conditions”.

The Kačerginians who lived at that time still remembers the poet standing by the window and observing the environment, walking the paths along the forest or sitting on the balcony of the house with a book. The writer appreciated the music, knew a lot about it and played the piano himself. If the conversation went smoothly with him it was very interesting to discuss.

Today Kačerginė remained as cozy and calm as then. Surrounded by forests and Nemunas river, this town invites you to visit, to in it and to discover something new or something long forgotten.