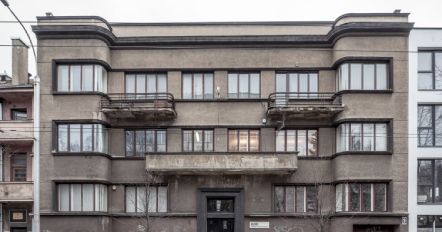 During the interwar period, Kaunas not only became the cultural, economic and political centre of Lithuania, but also a giant construction site. From these tumultuous times, we have inherited a throve of architectural creations, but the people behind these monuments and buildings are often forgotten, their names slowly fading away from public memory. The Ilvoskis brothers are, however, an outstanding exception to the rule.
The brothers Dovydas and Gedalis Ilgovskis were the most famous real estate developers in Lithuania before the war. It was a running joke, back then, that the true rulers of Lithuania were the Chodakauskaitė sisters and the Ilgovskis brothers. Their company used to win most of tender offers, and erected most of the landmark monuments in Kaunas, like the Žemės ūkio, the Ugniagesių, or the VDU’s Faculty of Medicine buildings, the Jewish primary school, the Eyes, Ears & Throat diseases hospital, the Vytautas Didysis museum, or the Panemunės bridge.
Their house in Kaunas is still standing to this day, its architecture wonderfully reflecting its owners’ standing and prestige, while the high-quality, luxurious decorations speak volumes of their wealth.
The house is accommodated with two staircases separated by a glass wall, while the finishings use artificial marble. The brothers’ real estate development company itself was located at the house’s address. Above the gates, one can still see the brothers’ monogram. Unfortunately, the house has somewhat suffered from the passing of time, lacking proper maintenance and care.