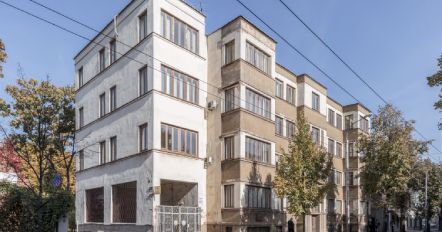 One of the earliest examples of a functionalist aesthetics in Kaunas, this building has a particularly laconic exterior of severe geometricized forms, with a clear delineation of spaces and planes and a distinct rhythm of elements. The kernel of the complicated plan is constituted by original oval-shaped halls. The purpose of the building was manifold: the first and third storeys had two five-room apartments; the second contained not only the owner`s apartment, but private suites in which he practiced internal medicine and Dr. Girša Elkes practiced ophthalmology. In one of the rented apartments the first Montessori kindergarten in Lithuania was established; from 1936 to 1940 the building also housed the Finnish consulate.