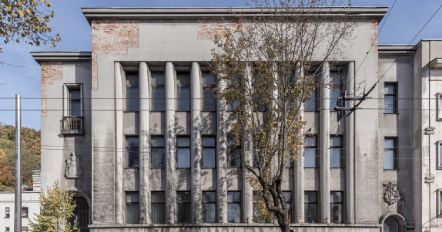 Do we often lift our eyes from the pavement or a phone screen to see the city’s “palace” that became an orphan some time ago? With both their interior and exterior they tell us about different destinies that betook them. For example, a beauty at No. 8 on K. Donelaičio Street meeting us at the turn of the street. The real accent of this fragment of the street that “arrived” here from elsewhere. It was planned that it should appear (but it never did) – next to the Museum of War, yet it effected its character, nonetheless. Take a good look. Doesn’t it look like the rhythm of columns that support the walls of the Bank of Lithuania and the stone beads neatly outlined on the sidewalk in front of it? Do not its entrances resonate with the arcade of the Museum of War? However, these are only speculations, so let us go back to more tangible things, closer to Parodos Hill, where everything actually happened.

The symbol of Lithuanian Economic Independence

During the First Independence Period, various exhibitions used to take place on the Parodos Hill (hence the name Exhibition Hill) since 1922. They would gather crowds of visitors and were perceived as a large nationwide event. This was were the progress of the Lithuanian industry and agriculture was assessed, innovations were introduced, competitiveness and consumption of local produce were encouraged. Therefore, it may not be a coincidence that in 1937, it was decided to build the Palace of Chamber of Commerce, Industry, and Trades that was supposed to become the symbol of Lithuania’s economic independence precisely here. There was a large meeting hall installed in the building, special premises for Kaunas Labour Exchange Office, and Economic Council and in the basement, there was a shelter. During the peacetime, it acted as a bar, that could be “(…) more or less compared to a palace basement that was open in foreign countries and where callers met and discussed various affairs” (Tautos Ūkis 18 02 1939).

While the legal basis for the future institution was formulated already in 1922 in the Constitution of the Republic of Lithuania, the “palace” itself opened its doors in 1925, when it found shelter in a rather cramped office in Laisvės Alėja, later in Kęstučio Street and gradually grew as the state itself. The key and gradually established activities were the following: representing Lithuania in the international economic union, consult the state, promote business culture, protect the local market and ensure its autonomy,

promote local industry and competitiveness of its production and increase export volumes opening business routes to the global markets.

Even though the emergence and growth of industry is basically associated to the Interwar Period, Lithuania has always been famous for the tradition of crafts and skill. The fragile independence of the First Republic won after more than a century of oppression and occupation and involvement in the modernisation processes during the inter war period encouraged not only to strive for modernisation, but also to look for the new ways to maintain the national identity. The pursuit of the national style and its creation in architecture and design became one of the parts of political programme, and promotion of the national culture was perceived as one of the key options introducing the nation to the world. This state policy in the 1930s gave the first results: Lithuania was increasingly discovered by the world, the visibility and appreciation of Lithuanian production in the international exhibitions increased as well. Textile workers and cabinetmakers were praised for their particular skills. Therefore, an important turn of activities takes place in 1936, crafts were added to the operations overlooked by the institution and included into its name.

Synthesis of arts and architecture

This was partially in line with the European trends of that time. With the industrial progress gaining momentum, crafts and manual labour were replaced by the industrial production that eventually caused tension and encouraged the formation of a style that was modern yet encouraged the idea of traditional craftsmanship, namely art nouveau and art deco. Next to the simultaneously developed “pure” modernism, these styles supported the vitality of decorativeness and ornaments in art and architecture. Their aim was to fill the everyday life with quality products manufactured following the tradition of arts and crafts so that industrially produced items would not upstage and destroy the aesthetics of things.

Art nouveau and art deco architecture includes ample composition of classical yet also modern sculptures, frescos, mosaics, stained glass details, etc. Usually these elements of décor were placed in the most significant places of the building: next to the entrances, terraces or the top, thus highlighting them and emphasising in the main composition. Even though a style shaped in the urban culture and environment cannot be related to the attributes of the rural environment and lifestyle, in Lithuania, after 1930, art deco fashion was associated with the ethnic details. Its appeal was also determined by the fact that at the crossroads of traditionalism and modernism during the interwar period, this style occupied a unique place of an intermediary, and it was in line with the creation of then-promoted national style. The pursuit of this national uniqueness can be detected in fine arts, architecture and in the Palace of Trade, Industry and Crafts. Thanks to the famous sculptors and painters of that time, this palace was a fine example of the synthesis architecture and arts: sculptor B. Pundzius contributed to the decoration of its façade and interior, so did painters like J. Buračas, P. Kalpokas, A. Jočinas and S. Ušinskas. It was planned to furnish all halls with

Lithuanian-style furniture, made, one could guess, in the workshop of J. Vainauskas, “Vainauskas ir Co”, that was famous in the 1930s as a factory “creating and making furniture in a modernist national style”.

However, let us not forget the architect who conducted this harmonious orchestra. V. Landsbergis–Žemkalnis demanded that all construction and installation works of the palace were carried out strictly in accordance with technical and aesthetic project requirements. He took care of the installation of every detail of the palace, finishing, decorations, and furniture that he decorated himself. Applying the experience and knowledge gained during study years in Rome, skilled in combining classics with modernity, the architect gave the city not only an important symbol, but also created one of the most significant works of his life. Unfortunately, it did not last long, as in 1940, together with the Soviet occupation, the Palace was reorganised, liquidated, and the building itself was expropriated. Yet this is another story… On the other hand, becoming a library is one of the best scenarios that could have been happened to this building. Even though these roles were not easy for both parties involved. One finds its very difficult to bear the unexpected burden of a book depository, as witnessed not only by the cracks, but also by the tears of plaster that falls on the floor and flows down its walls leaving dark spots. For the other, it includes financial costs and duty to take care of the beauty and health of the orphan.

Well, if you ever get ready to enter this building, with some purpose or without it, open this text and stop in front of the sphere. There’s a rumour that when the design of this palace was completed, the architect needed some accent. Something that would be like a dot, the final stroke in his long creative process. This is how the sphere has been born, bringing one’s attention towards the entrance. At least this is what is claimed by another Landsbergis whose name is Vytautas. And before entering, do not forget to lift your eyes. Meet Industry. Wearing a splendid robe, she stands with a basket of fruit, against the background of smoking chimneys, sea ships and gears. Beaten by rain, wind and cold, she meets everyone who arrives, patient and welcoming. Just like this palace, she reflects a difficult reconstruction of country’s economy after the World War 1 and the aspiration to rally industrialists and traders who worked in Lithuania.