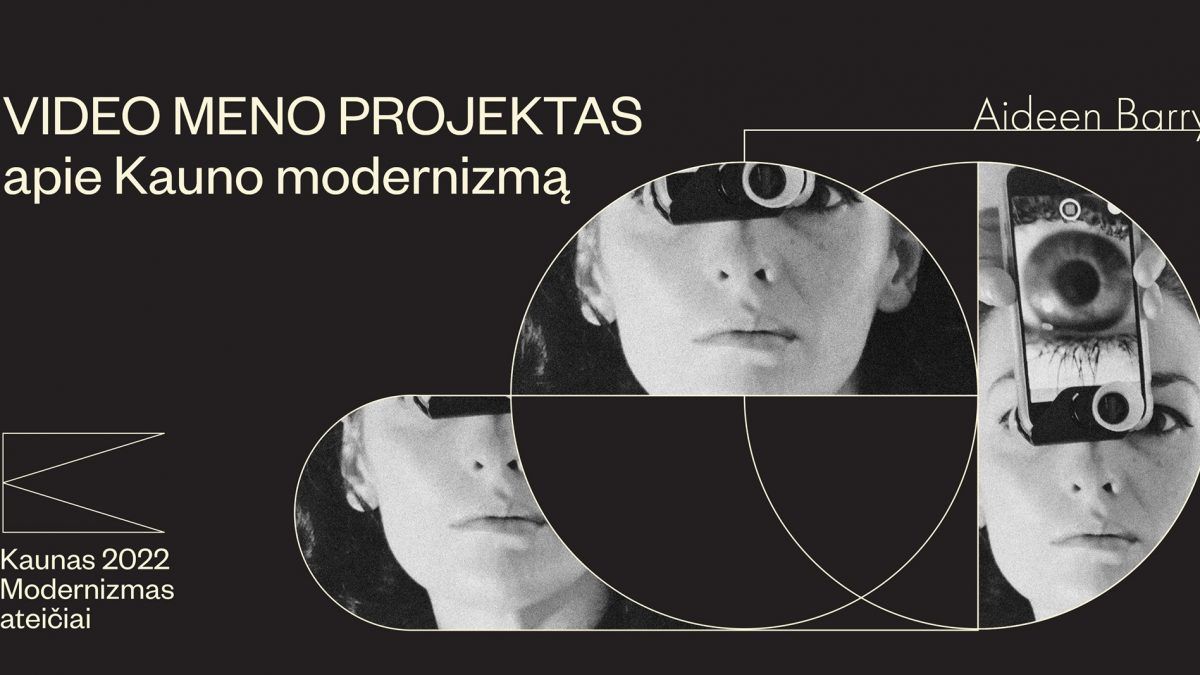 We are creating and in 2022 will be presenting a 45-minute long video art project that will tell the story of Kaunas modernist architecture for all the Europeans and the rest of the world and will inspire a creative look into its future. The author of the project is Aideen Barry, visual artist from Ireland. In her projects she explores and interprets local community, historical and cultural contexts in different ways in her projects, engages a different age and interest groups in the creative process and organizes it as playful experience-learning. The video art project Heterotopia will be presented in 2022 when Kaunas will celebrate the opening of European Capital of Culture in January 20-22. In the same year, the project will be presented in an international film festival (will be confirmed). Contact us if you want to join!

More about the idea:

Klostės (translated at Pleats or Folds) is a 45 minute Black & White non verbal film created by the People of Kaunas Lithuania together with Artist & Film-maker Aideen Barry. The film is currently in production and will debut as a part of Kaunas 2022 The European Capital of Culture. The film takes inspiration from Kaunas Architectural Modernism and the hidden histories associated with the magical city.

Klostės/Pleats is a metaphor for how time folds like fabric. It is a metaphor for how things can appear to repeat or loop. It is also an architectural trope for a repeat pattern, evident in Kaunas Interwar-Modernism. Klostės is a reference to how a film constructed out of thousands and thousands of still photographs creates a visual fiction or illusion., this is is how this film is sculpted. Huge amounts of investment goes into orchestrating a series of elaborate images to create a stop-motion animation. There is also a folding of time: forgotten stories, othered voices are returned from the abyss of time and represented, they are brought back into the Fold. Folding stories within stories, buildings within buildings like a cleverly constructed origami or pop up book. Protagonists appear out of objects, there is magic everywhere. Smoke and Mirrors are not only at play but are a part of the very direction that goes into constructing every gesture or movement. The Actors and AURA dancers who are partner collaborators in this project take this notion of folding into account in their gestures and nuanced movements. The composers and Foley artists too play with time to overlay or pleat a sound one on top of the other to create rich labyrinths of audible fabric that enrich the film.

This film is a socially engaged work, in that it has been laboured and created by hundreds of individuals to construct a complex series of stories and narratives, visual art, props, performances and audio visual experiences. This army is invisible, but it has been a body of creative people who have folding this visual art and filmic poem together to create this moving image pleat. 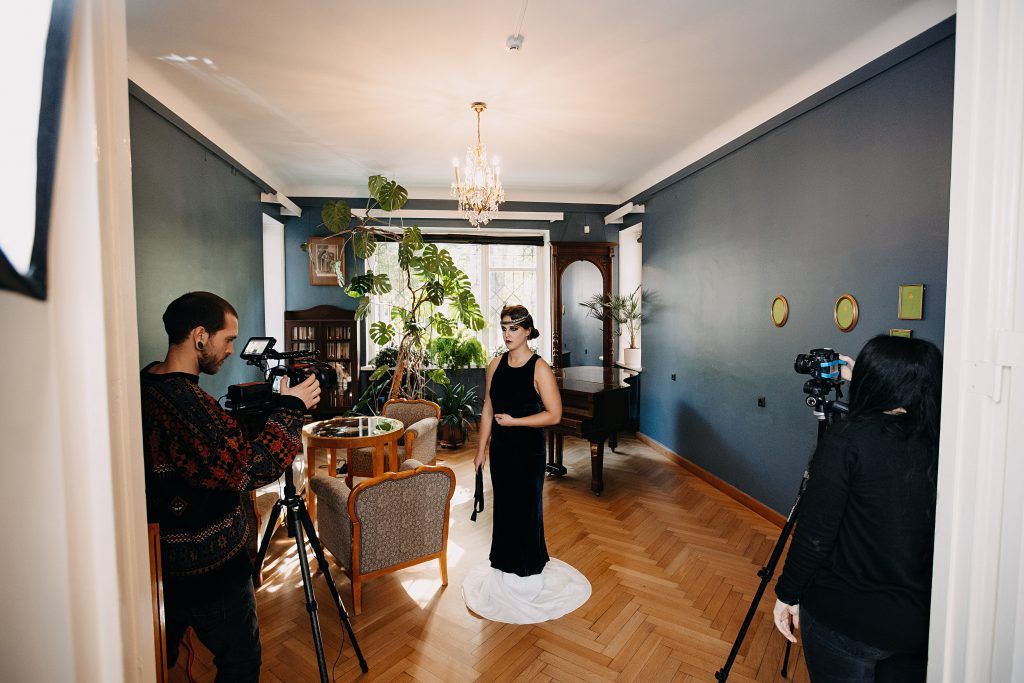 “I think it is really important to personalise the project a bit more to people. I think that will happen. I think if you know your son or daughter, your neighbour or friend wrote a short story about a modernist building, if they felt connected to it by being a part of the new stories: musical, dance, visual art stories that we are making with this project then yes I think it will humanise these unique and beautiful gems and get people thinking about them and emotionally stitched to them in some way.” Aideen Barry

Klostės is a socially engaged film project created in collaboration with artists, composers, performers, actors, musicians and volunteers made up of the citizens of the city of Kaunas.

The engagement of over five hundred children and young people in workshops in Short story writing, film directing, optical illusion workshops, Stop-motion Animation workshops,  introductions into Green Screen Technology & Prop Creation has also been intentional. This project set about fostering enthusiasm for this architectural and visual cultural heritage of this city. These groups of future artists have directed and made their own animated shorts adding further elements to the film project and an army of volunteers are currently engaged in large aspects of its production from workshop supervision, extra roles, artistic production, makeup and special effects.

The majority of Cast, Crew and Production of this film is made of people who live in this City. It is a deliberate intervention on behalf of Kaunas 2022 and the Artist & Director Aideen Barry to empower the creatives of this Contemporary Kaunas in the authorship of the film. The film  features dancers and actors from the acclaimed International Dance Troupe AURA as protagonists in the Roles of forgotten “Others” of Kaunas. 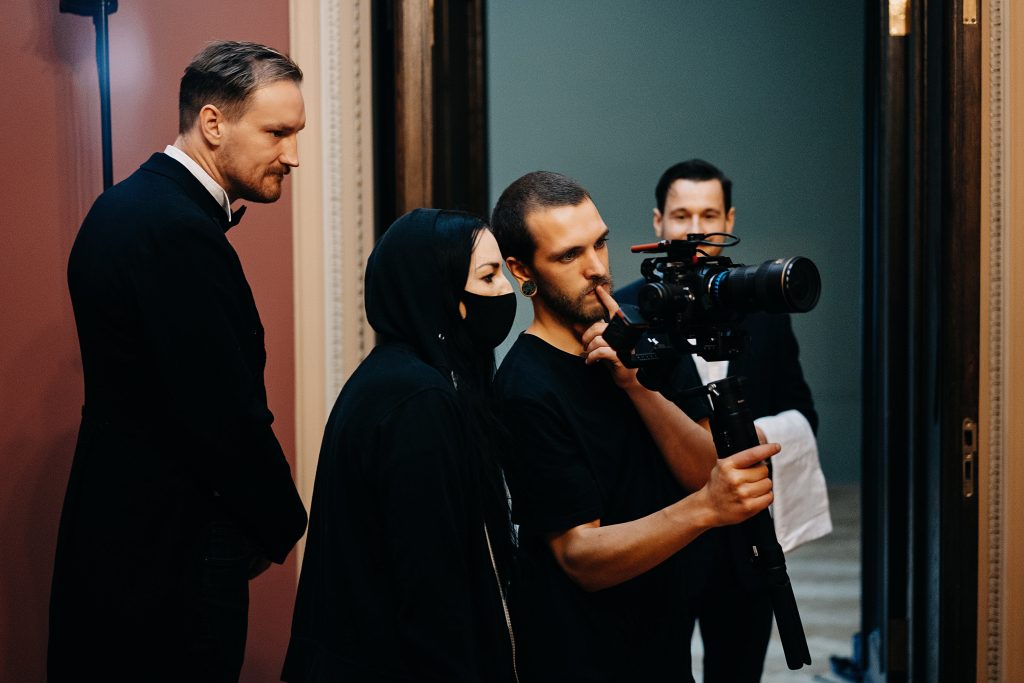 As a result of the project, the video art project Heterotopia will be presented in 2022 when Kaunas will celebrate the opening of European Capital of Culture in January 20-22. In the same year, the project will be presented in an international film festival (will be confirmed). MM Serra has already offered to Debut the Film in America in the New York Film Makers Co-Op in Manhattan upon its release.

“It’s like coming across a rare diamond. Truly, it’s amazing you have kept this secret from the world for so long. There are some exceptionally beautiful buildings and the little details really get to you, like motifs, balconies that seem to turn buildings into ships or the unique doorways and doors. It’s very special.” Aideen Barry

More about the artist:

Aideen Barry is a professional visual artist based in Ireland. She explores and interprets local community, historical and cultural contexts in different ways in her projects, engages a different age and interest groups in the creative process and organizes it as playful experience-learning. Aideen has shown projects in museums and galleries such as Mothers Tankstation, The Irish Museum of Modern Art, Louise T. Bloudin Gallery in London, Moderne Mussett in Sweden, The Loop Biennale in Spain, The Wexner Centre in Ohio, The Royal Hibernian Academy, the Musée des Beaux Arts in Lyon, The Crawford Municipal Gallery etc. 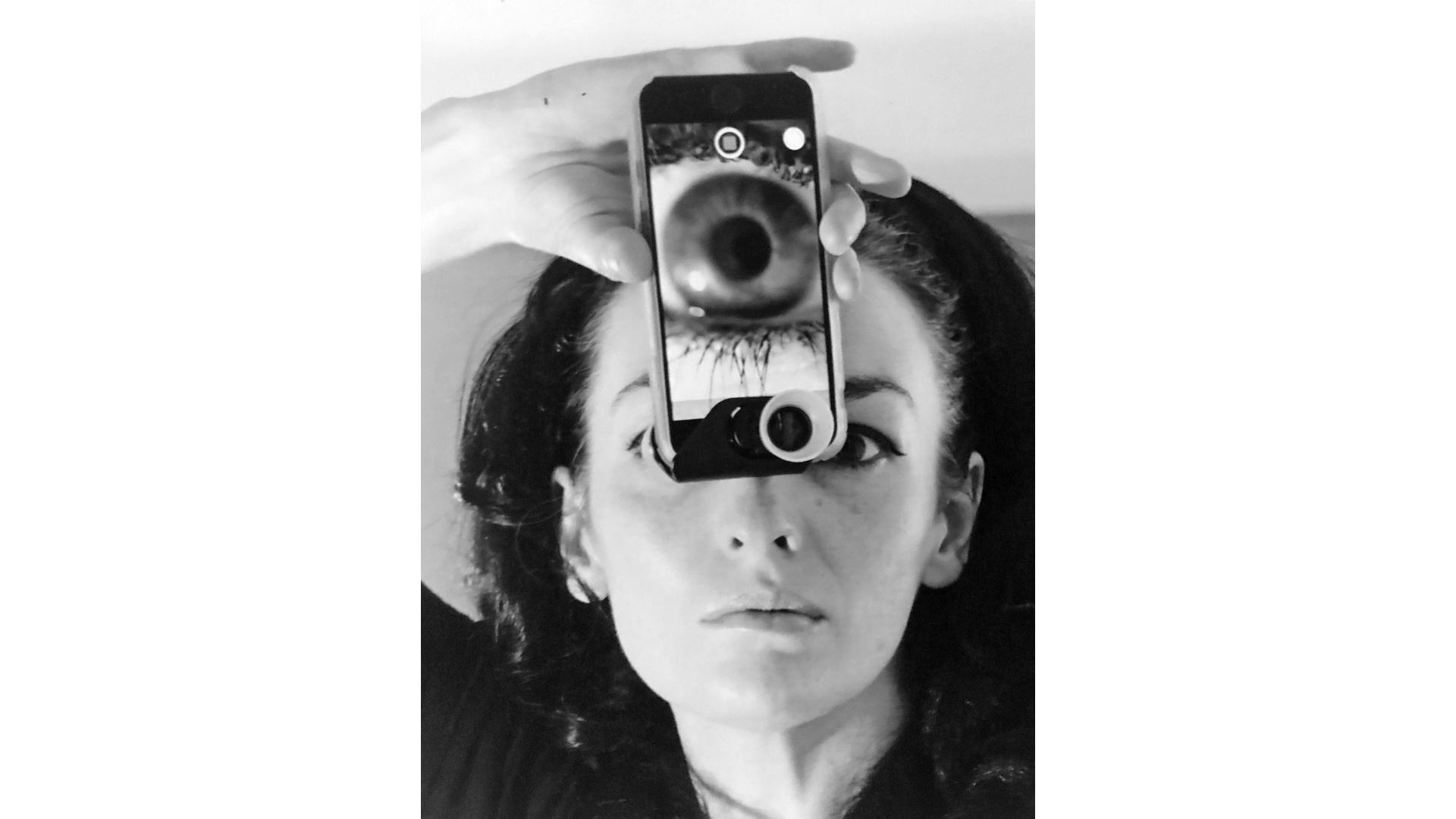 Barry has received numerous awards including the Culture Ireland Award (2018), The Vermont Studio Centre Fellowship Award 2017, Project New Work Awards from the Council of Ireland Bursary Awards (2011, 2013, 2015, 2017), the Modern Ireland in 100 Art Works Award, the Silent Light Film Award, Travel and Training Awards from the Arts Council of Ireland, and in 2010 was shortlisted for the prestigious AIB Prize. In 2014 she was commissioned by the European Union Culture Fund to create a number of temporary public art projects in the UK, Ireland and Catalonia, Spain as a part of the www.CHANGINGTRACKS.eu projects, and by the Arts & Heritage Trust UK in 2015.

Barry a lecturer in fine arts at the Limerick School of Art & Design, Limerick Institute of Technology. In 2019, her film „6SKIN” was nominated at the Aesthetica Short Film Festival.