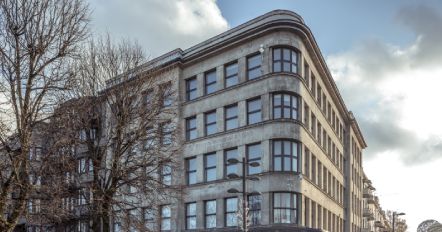 Routes: The Scyscrapers of Kaunas ; The New Town of Kaunas

An example of beauty revealed in simplicity, this piece of architecture earned a bronze medal and honorary diploma in a 1937 world exhibition held in Paris and called Exposition International des Arts et des Techniques. The road towards simplicity led through painstaking searches reflected in a multitude of architectural sketches before the gates were opened by constructions of reinforced concrete frames. The harmony of horizontal and vertical elements, the rhythm of details, and the flawless proportions created a laconic image whose effect is enhanced by an arching corner facade with curved windows and illuminated glass rooflet separating the first storey, with walls of black labradorite, devoted to stores and disvided by shopwindows. The building is multifunctional. In addition to the shops and administrative offices of Pienocentras, the building also housed Kaunas`s famous Muralio hair salon for women and men. The fourth and fifth stories had apartments for employees.