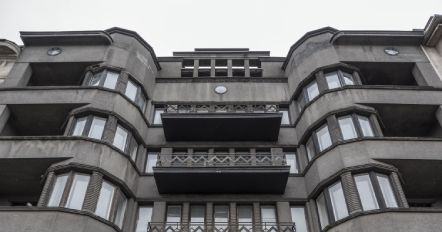 Routes: The Scyscrapers of Kaunas ; The New Town of Kaunas

As Lithuania’s industry and economy grew, its new (although, it was hoped, temporary) capital – Kaunas – witnessed a construction boom on a gigantic scale. Under the influence of western lifestyle and values, architecture quickly became one of the main expressions of modernity, as every institution looked the building that was housing its offices as a real-life ad for its brand. Pictures of buildings were widely published in the press, displayed on packaging, and even printed on official documents.

The building housed various institutions, publishing houses, and editorial offices associated with the Nationalist Union (Tautininkai). Additional structures were laid out in the courtyard. The cellar had a meeting hall lit by glass block light ceilings. The top floor had a restaurant with a terrace on the roof.