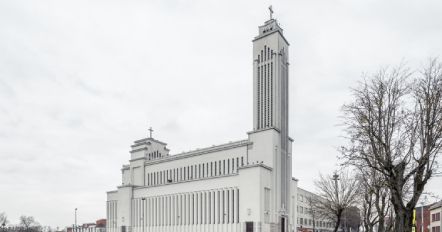 Lithuania declared its independence in 1918, and a couple of years later, in 1922 a priest prof. Pranas Būčys shared his idea to build a church in Kaunas as a monument for resurrection and the independence of Lithuanian nation. A project for the church was designed by architect Karolis Reisonas in 1929. He imagined the church as a 82-meter tall spiral tower crowned by a 7 meter tall statue of Jesus Christ. However, this project was too pricey and not very well accepted by the people of Kaunas, therefore abandoned. A new project was inspired by modernist spirit and designed in 1932. It was believed that the new church would become a monument of XX century architecture because of its contemporary style, advanced construction and quality materials. Its size was also extraordinary and exceptional in the context of the Baltic States.

The church was to be built out of reinforced concrete frames and brick walls. The foundations were installed in a special way: about 1,200 reinforced concrete poles were put into the “floating” sandy soil at a depth of 4–5 m. The design had a flat roof what was not common for catholic churches at the time of construction. Local granite was used for the construction, and the window frames and doors were made of oak. The architecture of the church is monumental, laconic and rectangular. The church is 69 meters long and 26 meters wide, it has a a balcony for organ and choir, entrances on all sides, and two square towers – the small one above the central altar (Southwestern side) and the large one at the main entrance (Northeastern side). The height of the big tower is 70 meters, and height of the cross is 7 meters. The measurements of roof terrace are 45×13 m. The church was designed to accommodate about 5,000 worshipers (700 seats) and 2,000  people on the roof terrace. The church had to become a pantheon of the nation: the most important figures of the nation were to be buried in the crypts in the dungeon.

The construction of the church was complicated because of lack of funding. Therefore the community engaged in the collection of donations for the church. In 1938 the walls were masoned and the roof was covered in concrete. In the spring of 1940 main construction works were completed, but when Lithuania was occupied by the soviets, it stopped and the building was confiscated. During the WWII the church was used as a paper warehouse. In 1952 a decision was made to turn the church into the radio factory (Kaunas Radio Factory, which was later named “Banga”). The inside of the church was reconstructed, adapting it to the needs of the factory: three stories in the side naves and five stories in the central nave were constructed, the crosses were removed and the chapel was demolished, large industrial windows were installed.

In 1988 with the national awakening in 1988, the Lithuanian people started to lobby for the restitution of the church to the catholic community. In 1990, the LSSR Supreme Council obligated the “Banga” factory to return the building to the church in a condition it was taken in 1940. However, this requirement was ignored and the church was returned in a very bad condition. Then  reconstruction of the church was slow because of lack of funding. In 1998 the tower was restored and fixed, and in 2000 the condition of the church was finally close to the original. The monumental Christ’s Resurrection Church was reopened in the end of 2004. Since then, the building has  become the dominant landmark within the cityscape.