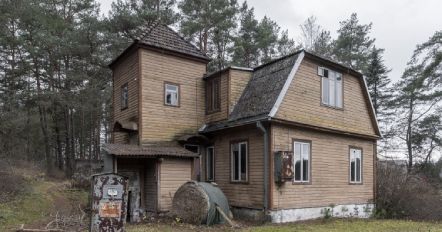 While working as a nurse in the hospital during the First World War, Pelagija Vaiciuškienė met officer Pranas Vaiciuška, who also worked there. After the war, they moved to Kaunas, where P. Vaiciuška worked at Kaunas City Hospital. As it was popular to spend summers in one of the resorts near Kaunas, the family chose Kačerginė, where they built two villas. In the larger villa, Vaiciuškos lived with their son Jurgis, and the smaller one became a summer house for rent to summer holidaymakers.

Both – husband and wife – had similarities. According to a friend of the Vaiciuškos family, both Pelagija and Pranas were very hospitable, welcoming and generous people. But, on one issue, their views differed. It was the religion. Pranas was a Catholic, and Pelagia was a strong Orthodox. Although Pelagija was a sufficient and calm personality anyway, she had a rather categorical opinion regarding this sphere of life. It goes without saying that she raised his son Jurgis in the truths of the Orthodox faith. Unfortunately, Pelagia surpassed both husband and son in age. After the war she moved back to Kaunas and lived there till she died in 1951.

The villa named after P. Vaiciuškienė in Kačerginė had become a summer paradise. The villa opened its doors to hosts who were visiting during the warm season. The two-storey building, planked with brown flat boards, is located on a hillside, near the main street of Kačerginė. The building, was designed by engineer P. Valiukėnas, and it dates back to 1930s. At the beginning of the Soviet era, the villa became a wood workshop for the students of Kačerginė school, later a home for teacher, and now quietly standa and waita for another interesting turn in its history.