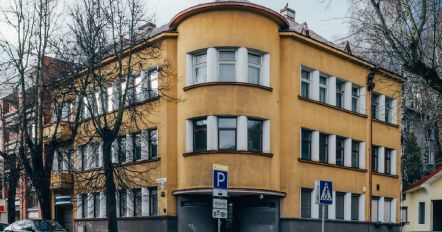 This late representative of V. Putvinskis Street was built in this place in 1938. It was designed by already distinguished architect of residential houses – Leiba Zimanas. It can be said that the Žaliakalnis funicular, which was installed next to it a few years ago and increased the flow of people in this place, partly shaped the architecture of the building. The house highlights the corner of V. Putvinskis Street and the path leading to the funicular, as if “accompanying” the passenger of the lift walking along the street towards the stop.

There were six apartments in the building – the living quarters were located on the street side or the path, and the kitchens and bathrooms on the other side of the corridor, with windows to the inner courtyard of the building. The architectural composition of the building is created by two wings, connected in the middle by a semicircular part typical in corner buildings. Its uniqueness is the round rooms inside. The facades are restrained, divided by narrow strips of windows separated by white columns. The in-depth entrance to the building, surrounded by two large cylinders with narrow glass eyes, also looks expressive.