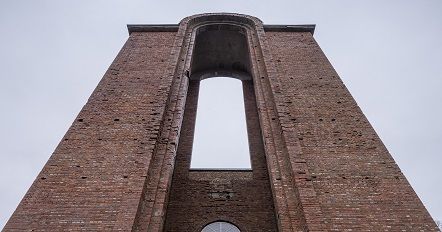 A modernist pearl at the outskirts of Kaunas

The church built in Pažėrai in 1793 still stands and has already celebrated its 200th anniversary. Yet as the time went by, it developed, grew and expanded. The congregation gathers in the old wooden church, a favourite by the residents (and referred to as the “žieminė”), but the history of the new church while shorter, is far more dramatic.

The construction of a large red-brick Church of the Sacred Heart of Jesus started after the consecration of its cornerstone in 1936, using the donations of residents and initiated by an active and energetic priest Jonas Rugys. An interesting fact: this small town’s church at the outskirts of Kaunas was designed by Stasys Kudokas, a young but already well-known architect from the interwar period. Unfortunately, the same destiny befell this church as it did the Resurrection Church: its construction was interrupted by war and the Soviet occupation. The architect himself did not live to see the consecration of his work either.

A drawing of the church by architect Stasys Kudokas. Source: http://pazerai.mozello.lt/

Grain warehouse of a collective farm

A spacious and roomy building soon gained a new function: in 1967, it was given to a collective farm and used as a grain warehouse. The rebirth of the church became possible only after Lithuania recovered its independence. In 1991, it was returned to the congregation, which in its turn helped to turn a new page in the life of the church. The late Monsignor Andrius Gustaitis a long-serving priest of the Sacred Trinity Church of Garliava and the native of Pažėrai, employed the help of Kęstutis Bubnaitis, architect-restorer to revive the church. The priest symbolically completed the construction of town’s house of prayer, and it was eventually consecrated in 1997.

However, according to the current priest of the parish, Kazimieras Skučas, “there were 2500 residents in Pažėrai before the war. Now only a quarter of this number remains.” During the interwar period, the parishioners decided that they need a larger, more spacious church, later generation continued its construction and its destiny is to be decided by today’s generation. Let us believe that its future will be as optimistic as the architecture it represents.