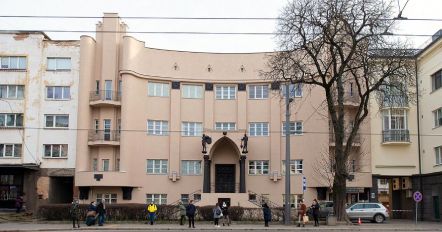 This private residence, located next to a busy boulevard, rightfully draws the eye of many a passersby. The building stands out among its modernistic Kaunas’ peers by its looks and decorative details, and breaks away from Lithuanian architectural tradition. Its outlandish looks have probably fuelled the many stories and rumours about its uncommon origins.
According to its contemporaries, this expressive residence is a real-life copy of images found in foreign newspapers and books of the time. Its original owners would have had the architect take an example from these foreign pictures, and build a house that would be an example for the whole of Kaunas. As a result, the building is rich in contrasts – its rich decorum mixes both art nouveau and art deco styles, while its front (street) and back (inner court) façades exhibit surprisingly different looks.
The back façade is remarkably modern, and could, with its nicely-balanced proportions, perfectly fit in any of today’s streets of the Naujamiestis district. This house epitomises the peculiarity of Kaunas’ modernistic heritage. Throughout all the independence period, buildings always tended to exhibit an official-looking, confidence-inspiring front façade, while the back façade would be of much simpler aesthetics, devoid of any decorums, and reflect a more day-to-day, modern image of what life in the city is really like.