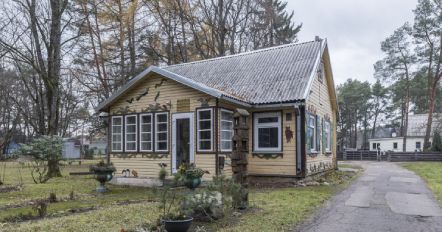 A corner of a pine wood called “Mašiotynė”

Older residents of Kačerginė remember the writer Pranas Mašiotas, fondly called “Pasakų Senelis” (The Grandpa of Fairy-tales), sitting in his summerhouse, writing and talking to children. This corner of a pine wood and a house next to it have been respectfully referred to as “Mašiotynė” to this day.

Kačerginė was a resort flourishing during the Interwar Period. It was frequented not only by citizens craving to relax, but has also become a place, where Lithuanian intellectuals used to gather in summer. A place next to Nemunas, surrounded by the endless pine woods, charmed the educator and mathematician Jonas Mašiotas. After returning from Russia in 1919, he worked as a teacher in Marijampolė Gymnasium. In 1922, he studied mathematics in Berlin and Zurich universities. He later worked in Kaunas “Aušra” Gymnasium for boys and in 1943, he was assigned as the senior teacher in Vilkija. In 1936, he approached an architect Vytautas Žemkalnis-Landsbergis, asking him to design a house for a permanent residence in Kačerginė, and in 1937, together with his wife, Veronika, he started living in their new home.

Mašiotas family is well-known in Lithuania, as there are many active public figures, educators, nurturers of culture and science since the time of Lithuania’s national rebirth. The father of Jonas, Pranas Mašiotas (1863–1940), was a highly esteemed and respected Lithuanian writer and educator. His student Vytautas Landsbergis-Žemkalnis shared his memories about his teacher: “Students and teachers equally respected and loved teacher Pranas Mašiotas very much. He was always in a good mood, smiling.”  Therefore, as a thanks to his teacher, the architect designed a residential house for Pranas Mašiotas in Kaunas, where he lived from 1929 to 1940.

A memory that became the Park of Fairy-tales

Pranas Mašiotas was famous as a children’s writer, author of literary textbooks, public and cultural figure. After retiring in 1929, Pranas Mašiotas dedicated himself to literary works and translations. His creative and literary legacy consists of over 150 books for children, also mathematics and physics textbooks, as well as preparation of spelling-books for elementary and secondary schools. His works also include translations of literary works for children that are now considered as classics, including Gulliver’s Travels and Robinson Crusoe. Pranas Mašiotas spent his last years living with his son in Kačerginė. In the summerhouse standing here, he worked enjoying the nature next to Nemunas that reminded him of his native Pustelninkai.

After 1990, B. Mašiotaitė-Kronienė, the granddaughter of Pranas Mašiotas, gave the summerhouse she inherited from her father Jonas and approximately 1-ha land lot in Kačerginė to the town with a condition that the summer house will continue to be maintained and used to appreciate the memory of Mašiotas family. In 2002, Society to Maintain the Memory of Pranas and Jonas Mašiotas started its activity in Kačerginė. It has been cherishing the cultural heritage ever since and, in a park, next to the house, established the Park of Fairy-Tales, full of various characters from the stories of the author. The society organizes children’s creative camps and, together with town’s community, creates future visions for Mašiotynė.

For this information we are very grateful for granddaughter of P. Mašiotas – B. Mašiotaitė-Kronienė!