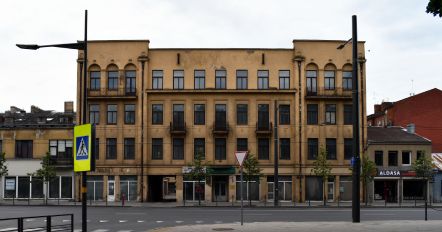 A Modest “palace” of the company

Apparently, the office of one of the largest cooperatives in Lithuania, which had a very significant impact on the economy of independent Lithuania, seems a bit modest. Especially when comparing it with the offices of “Pažanga” or “Pienocentras” companies in Laisvės Avenue. However, the “palace” of the company was considered to be a real decoration of Vytautas Avenue.

“Lietūkis” was a center of cooperatives, uniting one and a half hundred trade cooperatives with about 25,000 members. The Union was established in 1923 and operated until the occupation of Lithuania and liquidation in 1940. “Lietūkis” has made a significant contribution by exporting farmers’ products, providing cooperatives, and through them it supplied foreign and local goods to its consumers. The Union of Trade Cooperatives started its activities with 2.6 million Litas turnover and developed to 139 million Litas in 1939. “Lietūkis” had 23 large warehouses-divisions of goods, through which it supplied the existing cooperatives, stores, elevators and mills around them. Grain shops operated all over the country. This organization took care of the export of eggs, butter, flax, linseed, grain. Imported mineral fertilizers, salt, agricultural machinery, cement, oil, sugar, iron, consumer goods. 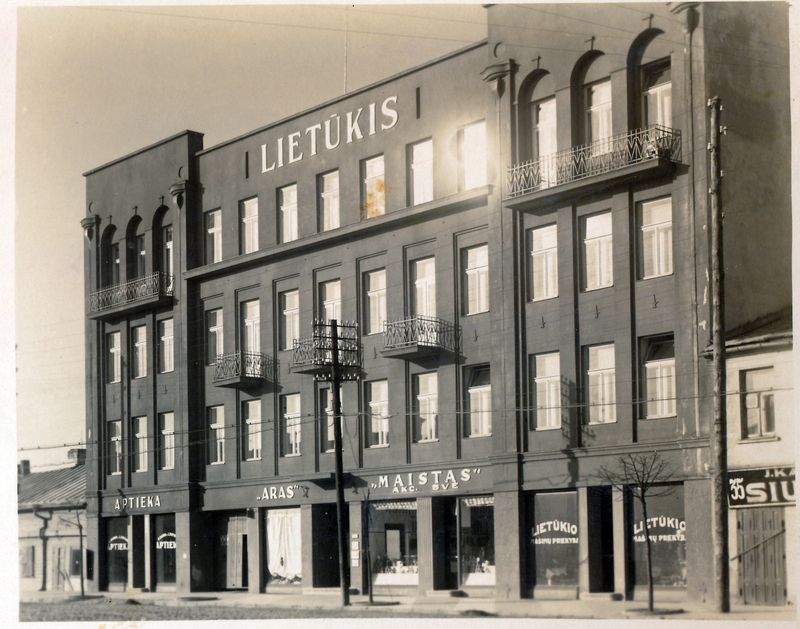 Architect in Kaunas of Latvian origin

The representative building of the organization in Kaunas was designed by the architect of Latvian origin Karolis Reisonas. In 1920 he came to Lithuania and worked in various cities. In the 1930s, as soon as he started working in Kaunas, K. Reisonas prepared the project of the “Lietūkis” company. It is an administrative building of the organization, the main façade of which has a clear eclecticism typical of the Šiauliai period: symmetry of the plan, arched windows, decorative details. The architecture of the building could be described as modernized historicism. True, the facade of the yard is much more modern than the representative “face” of the street. This building also had a commercial ground floor and apartments, one of which housed the architect himself. K. Reisonas was also the head of the construction department of the Chamber of Agriculture in Kaunas and a construction consultant of the Ministry of Agriculture, therefore he contributed a lot not only to churches, but also to the construction and design of such “earthly” buildings as: Žėmės bankas (Lands bank), Chamber of Agriculture, “Lietūkis” Warehouses. He also published the first Lithuanian construction textbooks “Agricultural Construction” and “Clay Construction”.