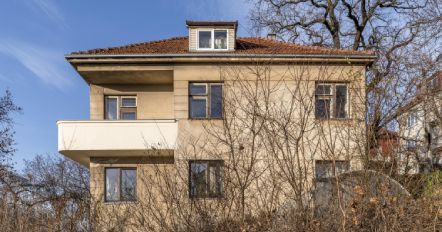 Liudas Truikys studied at Kaunas Art School, but also in Paris and Berlin, where he developed his skills as a set-designer. In Kaunas, he became involved in the Independent Group of Lithuanian artists and, in 1936, joined the Lithuanian Artists’ Union. It was during Truikys’s time at the Lithuanian National Theatre that he met the American-born soprano Marijona Rakauskaite, a rising star at the State Theatre who would go on to create over thirty roles.

The house that is now the Luidas Truikys and Marijona Rakauskaite Museum was built in the 1940s and the couple moved in soon afterwards. They would remain here until the end of their lives. It opened to the public after their deaths, in 1994, and displays paintings, decorative work and designs by Truikys alongside a selection of Rakauskaite’s stage clothes. Visitors can also see the couple’s extensive collection of Lithuanian folk art, particularly sculpture, and Asian art, important sources of influence and inspiration on them both.