The Chamber of Labor Building 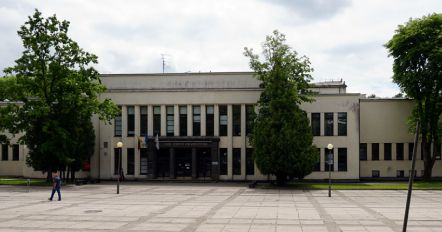 The building`s architecture embodies the goal of uniting the “classical spirit” with the modernism of new times. The building follows a cruciform plan. The large block has a sports hall with a vaulted ceiling of the unique Kreuzekrost construction. Reinforced concrete cofferings are covered by glass, above which there is a steel construction roof window. The swimming pool envisaged in the project was never built; a new one appeared in 1959 only. In 1935 a sports field was planned next to the building and main entry gate was built. But in 1979 the gate was demolished when Sports Street was renewed.