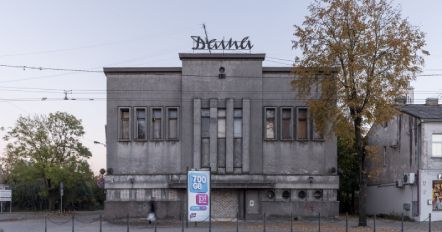 Because of its tranquil expressiveness and geometric architectonics, this 614-seat cinema distinguishes itself from other built at that time. The property of Dominykas Polovinskas, Jurgis Jankauskas, and Ona Breimerienė, it was designed by the engineer Antanas Breimeris, while the architect Stasys Kudokas was invited to create the exterior. There were 404 spectator seats in the auditorium of the cinema; 42 in the boxes; and 168 in the balcony. The facade was illuminated with neon tube lights. A nearly analogous building is in Šiauliai, which in 1940 came to accommodate a drama theater.