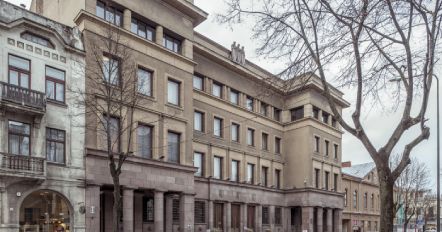 Lithuania’s historical past had a great influence on the creation of a modern interwar state. Throughout the period of independence, Lithuanian identity was oriented not only to the future, but also to the glorious past, in which the relics of paganism, aristocratic medieval culture and the legacy of “rural” Lithuania were intertwined. Therefore, decoding of all these contexts, symbols and meanings encoded in this modernist building becomes a hard nut to crack not only for a foreign guest, but also for Kaunas resident who walks down the street every day. Let’s get acquainted.

Let’s start from the outside. Before our eyes stands the representative palace of the Officers’ Club. It is useful to look at the building from a distance, but it is enough to move to the other side of the street. Take a good look. The similarity does not have to be specific and direct, but if you see a spirit of Italy in this building – don’t be surprised, this similarity is not accidental. You can put a big plus on yourself – you are gradually learning to “read” architecture.

In 1931 an international architectural competition was announced. It was won by the recognized Estonian architects Elmar Lohk and Herbert Voldemar Johansson, but Lithuanian architects and designers were commissioned to prepare the project. So at least few different designers contributed to the construction of the palace. The building is characterized by a combination of classic and modern features. However, the fact that the building resembles a modernized Italian Renaissance palace (palazzo) is probably the merit of architect Stasys Kudokas. In 1930 the architect returned from studies in Italy, at the Royal School of Architecture in Rome (Regia Scuola Superiore di Architettura) and with the invitation of city mayor Jonas Vileišis, he began to work as an architect of Kaunas City Municipality.

It is easy to see the three-part structure, typical of the palace in the building: the first part – the public ground floor, separated from the others by granite blocks – imitation of smooth-faced rustication; the middle part of the building – the representative floor (piano nobile) with representative halls and leisure spaces; the third part – the upper “living” floor with open balconies (loggia) and the hotel rooms providing temporary accommodation.

A center for leisure and culture of the Lithuanian Armed Forces

In the interwar period, social activities, formation of the clubs and corporations were very popular. Officers of the emerging Lithuanian army established the Kaunas Garrison Soldiers’ Club in 1919. The benefits to society of patriotic officer activities have been also recognized. The club united all the officers, military doctors and chaplains of independent Lithuania into one family. As the military remained a highly significant, sufficiently plentiful, and privileged section of society throughout the period of independence, maintaining contact between the military and society was an important task.

Eventually, the club, as an organization, began to fall short of officers’ expectations, and the word “club” itself took on a negative connotation at the time. The famous Lithuanian linguist Jonas Jablonskis suggested the term “ramovė”. “Romuva” or “ramovė” is a legendary shrine of the ancient Baltics, the home of the main priest, where the eternal fire burns. In 1924 the corporation of officers and the place where it was located were named after Ramovė. It means “home” of the soldiers’ club, where to it’s fireplace Lithuanian soldiers and society gather.

It is no coincidence that the façade of the building was decorated by three soldiers “on duty” created by the sculptor Bronius Pundzius. These symbolic ancient heroes throughout the history helped to preserve Lithuanian statehood. Above the entrance there are the coats of arms of three main Lithuanian cities. During the interwar period, there was no year when both the historical capital Vilnius and the seaside port Klaipeda belonged to Lithuania at the same time. Therefore, these coats of arms reminded every passer-by in a way that the struggle for the integrity of these territories and the state is not over yet. Let’s go inside.

The impressive interior of the Ramovė Palace was seeking to reflect the young state’s achievements in architecture and design, as well as rapid modernization. As the palace was also used to represent the government, the signs of statehood intertwine here with the rich ethnic symbolism of modernist architecture and the latest technologies of the time. On the ground floor was the “Three Giants” restaurant, the hall of which was considered the most spacious in all of Kaunas at that time. The restaurant was extremely modern with its ventilation system: the air was changed 5 times per hour.

On the second floor of the building there were representative rooms: the modern-medieval style Vytautas the Great Hall, reflecting the glorious past of the Grand Duchy of Lithuania, and an example of national and modern art – the President’s Room for informal communication with guests, the Great and Small Halls and the Winter Garden. The interior equipment has been developed using the most advanced innovations of foreign companies. The building still has an authentic elevator.

The Vytautas the Great Hall

The hall was designed to reflect the reign of the Grand Duke Vytautas and reveal his feats. The main highlights of the art are: a massive marble fireplace with medals created by the sculptor Petras Rimša, the heraldic stained glass windows of the artist Stasys Ušinskas and the panels of the painter Jonas Mackevičius. The interior of the hall was designed by architect Jonas Kova-Kovalskis and implemented by Jonas Prapuolenis.

The room was decorated in a Lithuanian style, combining modern and national art. This is the most significant example of the 20th century Lithuanian professional national style in Lithuania. The main element of its decoration is a black artificial marble fireplace, furniture created by Šiauliai artist Gerardas Bagdonavičius, fabric-covered walls and lamps, and wood decoration.

This is the largest space in the building. Columns covered with artificial marble, “warm” colors, chandeliers, window and radiator grilles give the hall solemnity and chic. Due to its very good acoustics, concerts, meetings, lectures and banquets are still held here. The decoration of the hall is also a luxurious piano “Steinway” (1936) donated by the President’s wife. The ornate hall ceiling can be illuminated with the colors of the Lithuanian flag.

Kaunas Officers’ Club building remains a significant threshold between the military and society. A lot of military and public events, state, military and memorial days, exhibitions, lectures, concerts are being organized here. There are art groups, sports and military history clubs in Ramovė. The headquarters of the Lithuanian Officers’ Club with its architecture and decorations still testifies to the exceptional social status of the officers in interwar Lithuania. It is one of the most significant testimonies of interwar Lithuanian architecture that has reached our days, having retained its unchanged function to this day, it is interesting not only for its expressive architecture, but also for its no less special content.