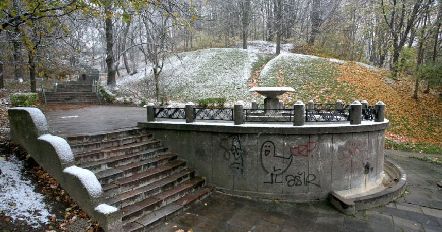 This place recalls a three-parted swimming pool, a fountain, gold fishes, water lilies and the elegant ladies, wearing their classy swimsuits and sun hats, chattering in a sunlight… Everything suggesting the Golden Age of Kaunas city during the Interwar period, as the temporary capital of Lithuania.

Kaukas stairs are located near by former Žaliakalnis water-supply station. Together they form one functional ensemble. On the other side of Aukštaičių street were three open basins intended for water let out from reservoir during cleaning operations. The water from these basins as well as other Žaliakalnis effluents were collected in the sewage system`s main container, installed under the Kaukas Stairway (1936) connecting Žaliakalnis with Naujamiestis. In the lower terrace a fountain was installed. The broad steps of hewed granite, embellished with decorative plants around them, were the loveliest in Kaunas, and the area around the basins became favorite resting places. Towards the end of the war some of the installations were bombed. Instead of three basins one was reconstructed.