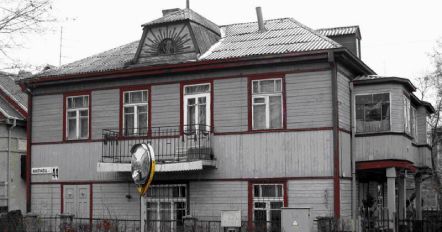 House with balcony to the Song Square

It was a house from which family members or guests could watch the Lithuanian song festivals happening in the neighborhood. In this house facing the street with a balcony, officer Antanas Gedmantas and his family settled in 1928.

As usual at that time, the house was built not only for the family, but also for rent. The owners lived on the second floor of the building, while the first floor seemed attractive to the shopkeeper. Apparently this is why it was separated from the second floor and had a separate entrance from the street. According to the granddaughter of Antanas Gedmantas and a current resident of the house there was also a dentist’s office, owned by her grandmother`s sister. That is why a separate entrance on the side of the yard was installed, to combine a family life and allowing private dental practice.

The wooden dwelling house, which has a compact volume and has an authentic appearance, can today be properly named the guardian of the spirit of Kaunas Žaliakalnis and represents the wooden architecture of the city.