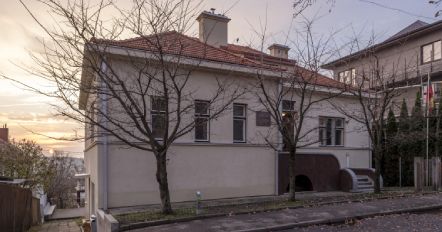 There are only a few houses in Lithuania that could boast such a significant story known around the world. And even though buildings could say quite often that they became refuge for generations, only a few of them could say: “I provided refuge for thousands”. In 1939, when making a typical villa in Žaliakalnis, Minister of Education Juozas Tonkūnas could not have imagined that he was making a monument for future generations. He never got to live in this house, and when the Soviet occupation started, he was deported to Sibiras.

On 1 September 1939, World War 2 started. While Lithuania was still independent, a lot of refugees from occupied Poland moved towards it, expecting to be safe here for at least some time, and then emigrate to other countries. Same year, Chiune Sugihara was assigned as a vice consul. On 15 June 1940, the Soviet Union occupied Lithuania. It became the fifteenth republic of USSR. When the Winter War broke in Finland and the Soviets agreed to let the people of Jewish origin pass, the only way to run away was through the Soviet Union. Yet it still was not so easy. For war refugees to be able to leave the territory of the occupied Lithuania, they had to obtain transit visas issued by the consul of Japan. Over a hundred of Jews started to flood the Consulate of Japan located in the J. Tonkūnas villa every day, in order to get visas and reach America and other countries available through Japan. Kaunas became some sort of the centre of a local world, and visas issued by the consul Ch. Sugihara saved over 6000 lives of war refugees brought to Lithuania by war.

Embassy of history, culture and heritage

In 1999, the patrons of the Sugihara foundation “Diplomats for Life”, Birūtė and Ramūnas Garbaravičiai, purchased the house from its inheritors and passed it for the use of the memorial museum, called Sugihara House. The initiators of the foundation aim to rally the intellectual effort and funding so the memory of the Japanese diplomat Ch. Sugihara would be memorialised in Lithuania alongside other few diplomats of the world who were brave enough to save the European Jews in the face of death. For today’s generations, it reminds of threats deep inside the nature of the humankind and sets an example for tolerance, goodness and justice.

In 2017, a group of painters arrived from Japan not only to contribute to the reconstruction of a house of a historical hero important to them, but also… “give others as much happiness as possible!” During their initiative, some money was donated to the reconstruction of the building. Together with local workers, they worked fixing the window frames, walls, windowsills and floor. Even though the embassy that provided invaluable help for people struck with misfortune is long gone from Kaunas, it brings great joy to everyone that today, this building is a bridge that connects not only nations, but countries and cultures separated by tens of thousands of kilometres.