Brutalism is an architectural style which emerged during the 1950s, among the reconstruction projects of the post-war era. Brutalist buildings are characterized by minimalist constructions that showcase the bare building materials and visible structural elements over decorative design. The style commonly makes use of exposed concrete or brick, forbidding geometric structures, and a predominantly monochrome color palette; other materials, such as steel, timber, and glass, are also featured. The style was further popularized in a 1955 essay by architectural critic Reyner Banham, who also associated the movement with the French phrases béton brut (“raw concrete”) and art brut (“raw art”). 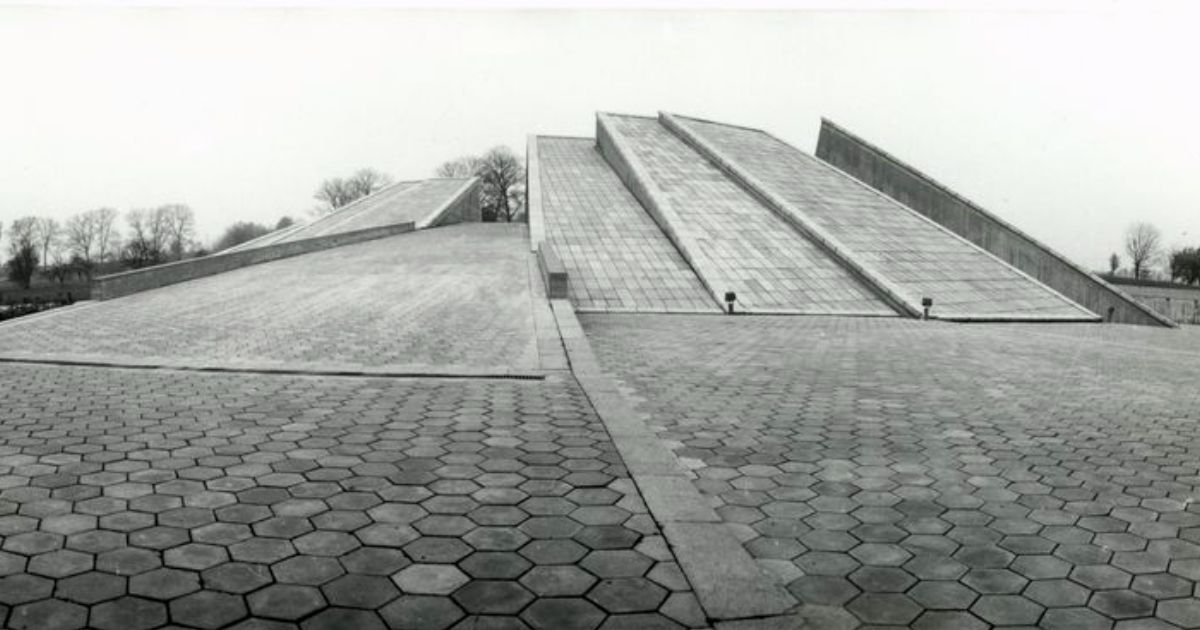 Photo by Alfonsas Vincentas Ambraziūnas. The main facade of the Museum building in memory of the victims of fascism of the Kaunas IX Fort Memorial Complex. Source: www.limis.lt

On July 9, 1958, a Museum of Revolution History was established in the Ninth Fort in conformity to the Decree of the Soviet Ministers’ Council. In less than a year, on May 30, 1959, the museum was opened: the first exposition about Nazi crimes in Lithuania was presented to society in four former cells of the Fort. In 1960, research started in the field of mass massacre by the Ninth Fort in order to identify the boundaries of mass murder territory and to collect proof (i.e. exhibits) about the mass murder which took place here. 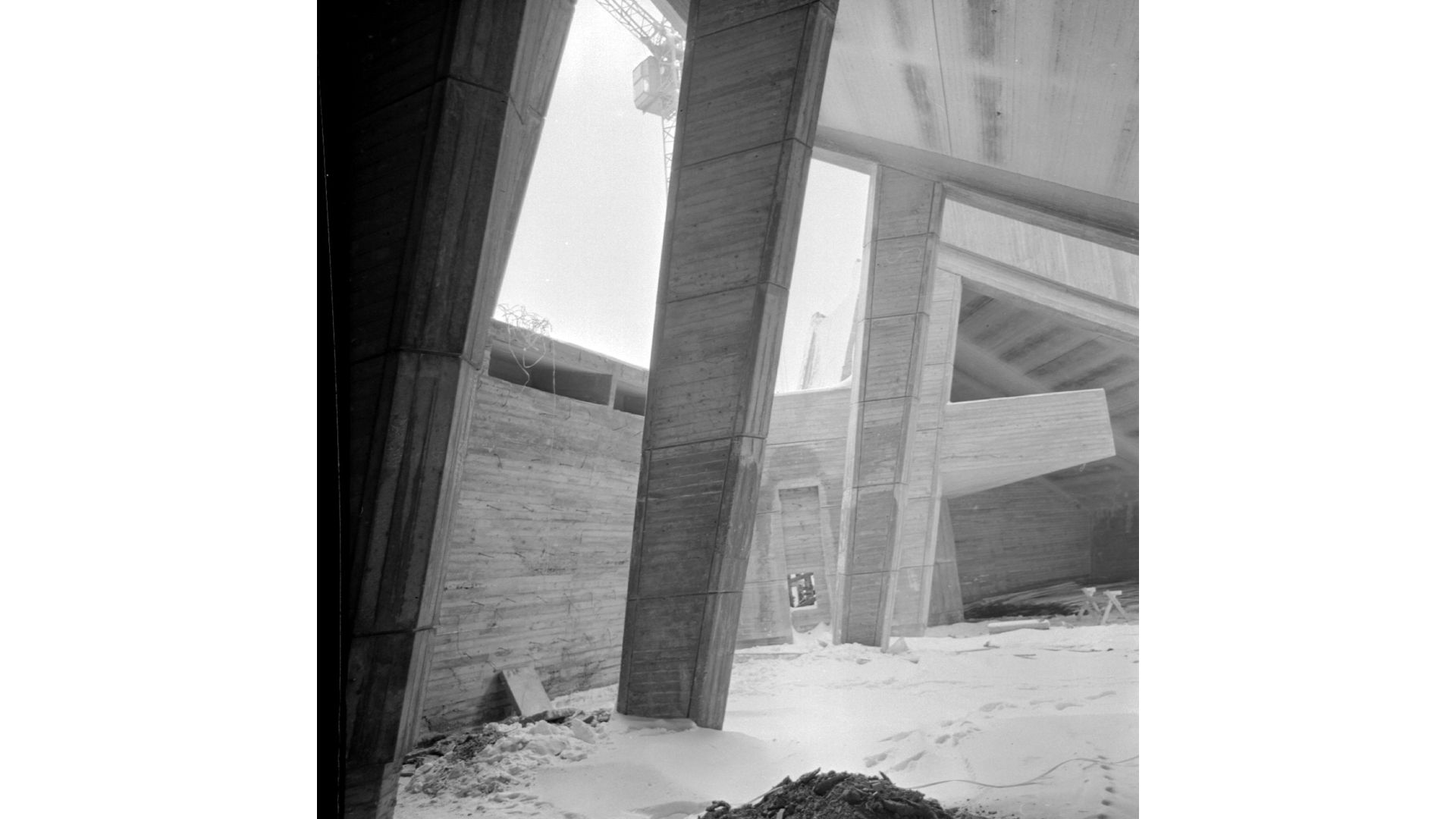 The inside look to the construction site, 1982. Photo source: Kaunas Ninth Fort Museum.

In the 1960s, the memorial complex establishment of Kaunas Ninth Fort started. Four competitions of project suggestions took place in 1966–1970. In the final stage, the project by sculptor Alfonsas Vincentas Ambraziūnas, architects Gediminas Baravykas, and Vytautas Vielius won. After thirteen years of construction, a 32-meter monument composed of three groups of sculptures was built in the place of mass murder to commemorate Nazi victims. Near the Ninth Fort, a new museum building, having original forms, was constructed (now – the Exposition of Occupations) and a park with paths for walking was established. On June 15, 1984, the memorial complex of the Ninth Fort Museum was presented to society. It has become one of the largest memorial places in all Europe. 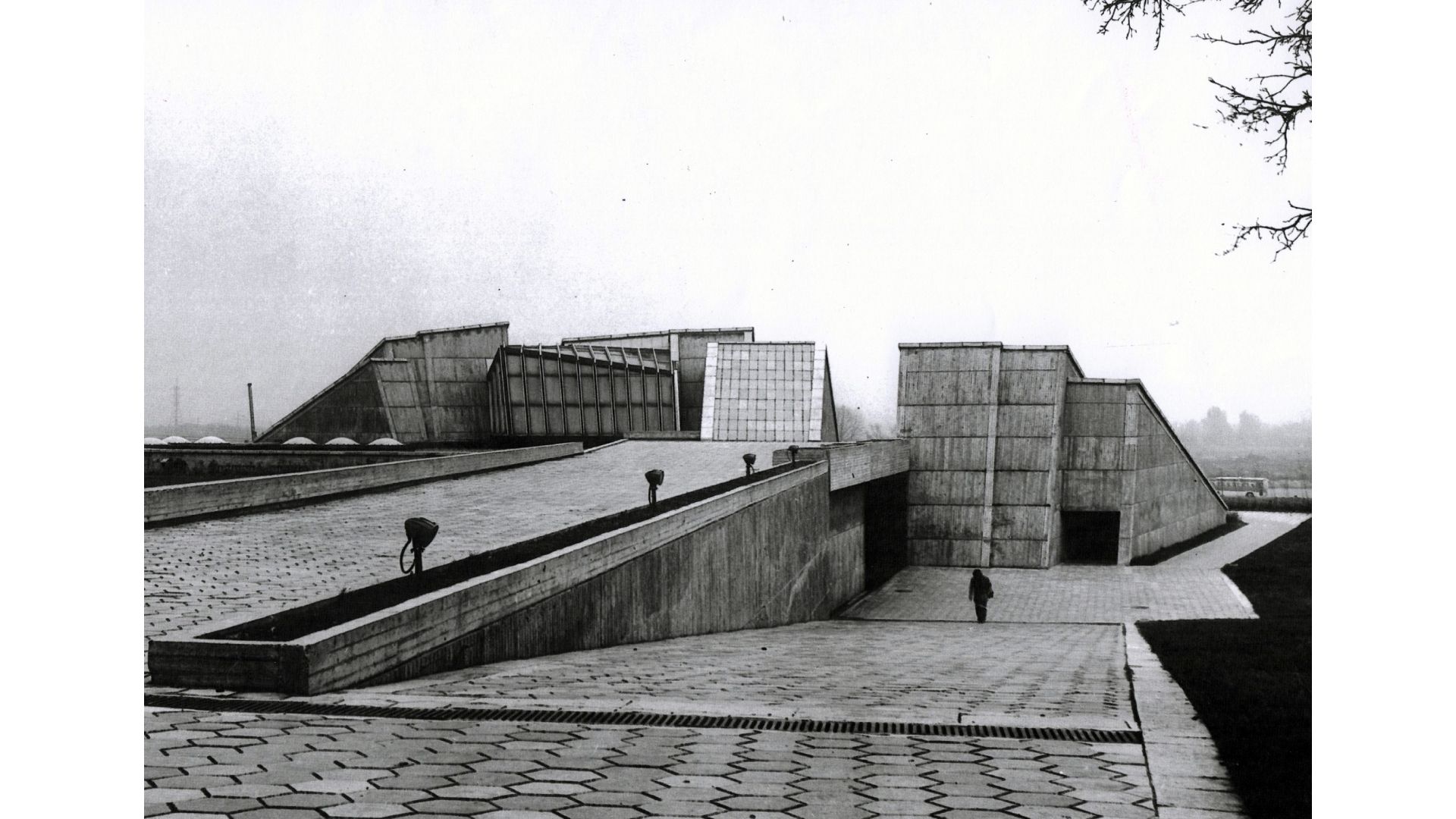 The architecture of the museum building symbolizes a land shattered by the pain of tens of thousands of people killed in here. Inside the building, the most characteristic features of brutalism architecture are clearly recognizable – huge rough reinforced concrete surfaces with casting pattern, instead of unnecessary decor – concrete, glass, metal construction. Exclusive works of art by Kazys Morkūnas – a thick stained glass wall “Invincible Lithuania” and the iron gate created by blacksmith Leonas Glinskis at the entrance and exit are integral parts of the building.

Since the reestablishment of Lithuania’s independence in 1990, a possibility to express ideas freely has risen, and the topics prohibited during the 50 years of Soviet occupation have been discussed. A possibility arose to speak not only about Nazi, but also about Soviet crimes, commemorating the prison which operated in the Fort in 1940-1941. New expositions were established, which introduce the visitors to all historical periods of the Ninth Fort history.