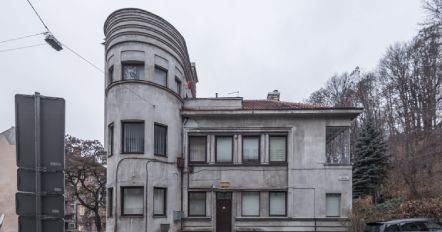 Out of the list of the most beautifully built

The house is well visible from all sides due to not being closely surrounded by other buildings. Such visibility is quite important as this house, expressive in terms of its’ form and architecture, has no two identical facades; each one is unique in its’ own way. Lydos dead-end street was planned out in 1929; it was supposed to have 6 lots to be owned by politicians and public figures. The street project reveals that the street was meant to play a much bigger role than it does now: it was in the plans to have a school built nearby, and it was to be the main street connecting the centre with the square on Parodos hill. Lastly, there were plans to construct the third funicular of the city at the end of this street. Because of this, it is no surprise that there was a lot of thought and effort put into the exterior design and architecture of this building. However, the municipality had a hard time trying to come to an agreement with the owners of private lots, and the Chamber of Commerce, Industry and Crafts was built nearby only in 1938.

One of the six lots was purchased by the publisher Jonas Rinkevičius and the merchant Rožė Rinkevičienė. Jonas was a co-founder of such publishing houses as “Švyturys” and “Spindulys”, and was socially involved. His wife Rožė – an owner of a perfume shop in Laisvės Avenue. The house was designed by architect A. Gordevičius. What stands out the most about the house is its’ tower with profiled edges; from it one could observe the city. In 1936, due to its‘ beautiful architecture, the building was included in the list of the most beautifully built houses. The owners of the house lived on the second floor, while the first floor was put up for rent. The Rinkevičiai family left Lithuania in 1944. Today the building houses several law firms.