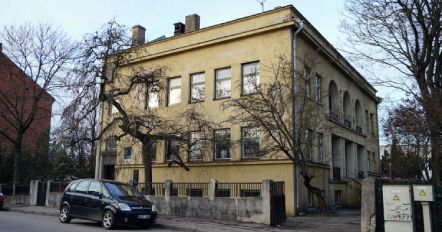 The house of Vladas and Elena Kuzmos was designed by architect Stasys Kudokas. It was built in the beautiful plot on a small Old Town hill. Because Vladas Kuzma was working a lot – he was a well known doctor and also taught general surgery at the university – the construction of the house fell on his wife Elena’s shoulders.

The house was designed not only to live but also to work. In the basement of the building there was a kitchen, other auxiliary rooms and mercenary rooms. On the ground floor was a family apartment, a patient waiting room and a doctor’s office. In the second floor, Vladas Kuzma installed a 10-bed hospital, which was opened in 1938.

The family house had a peculiar aura. This is how it was described by a niece of Vladas Kuzma – Regina Kuzmaitė-Norkevičienė:

“That house always had a special aura for me, created by my uncle and aunt. That environment constrained us not to miss the rules of etiquette”.