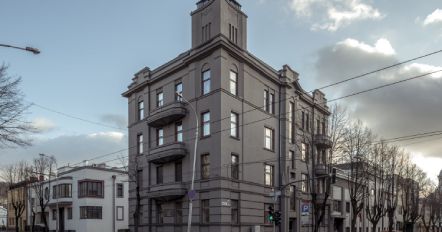 This multiresidential dwelling was always exceptional because of its location and expressive architectural language. The corner position of the house determined that both facades of the building are equally representative and decorative, while its garret was furnished with an expressive turret decorated with art deco elements.

Expression and luxury for respectable residents

This building was built in 1929 by a famous doctor and therapist of that time and political activist Pranas Gudavičius-Gudas (1876–1956). The building served as a hospital, managed by Doctor Gudavičius for many years. He lived there himself as well. The house was designed by a famous architect of Kaunas Edmundas Frykas. The luxurious and exceptional multiresidential dwelling served as a house for other famous Lithuanian public figures of that time: up until 1935, it was home for a Latvian diplomat and attaché of war in Lithuania, Fricis Kociņš, and also Minister of Education and professor of Vytautas Magnus University, Vincas Čepinskis. In the 1930s, the house was used for State Tax Inspectorate of Kaunas County.

When after the war Professor P. Gudavičius moved to the United States of America and died, the house was nationalised and the apartments were distributed to new residents. The building has always been exceptional not only because of the location chosen for it, but also because of the architectural language suiting it perfectly. The corner position of the house determined that both of its faces are equally representative and decorated, windows of various forms are arranged on its facade, it has decorative balconies, artistic masks and geometrical ornaments. It is one of the most luxurious witnesses of its past that reached our times.

Having decided to invest into the interwar heritage, in 2017, two young businessmen decided to purchase an apartment on the third floor. According to them, they purchased the apartment because Kaunas architecture helped them to fulfill their dream and travel not only in time, but also to the greatest metropolises of the world: New York, Paris and Berlin. It soon became evident that the authentic oak parquet, tiles in the kitchen and the bathroom and window handles are not the only witnesses of the luxury that reigned in the apartment: during the restoration of the apartment, unique wall ornaments, characteristic to art deco and art nouveau styles, were uncovered. Another interesting discovery is a print on the other side of the tiles that we know perfectly fine even today: Villeroy & Boch. The same tiles as in this apartment can also be found at Mies van der Rohe’s Villa Tugendhat, located in Brno (the Czech Republic).

With the help of restorers and researchers of architecture, the authenticity of the apartment was recreated as much as possible, including their colors and many fine details of the interior. An apartment that was restored as a private initiative and using private funds, became a memorable adventure not only for its new owners, but also the entire house community as well: at the end of 2017, the house community, city municipality and house administrator joined forces to renovate the facade of this cultural heritage as well. Another significant success story of heritage preservation, featuring great knack for initiatives, urban culture and attention to the past. It is a great gift for the city, and a souvenir of the time it flourished.

We thank the residents of this house, Karolis Banis and Petras Gaidamavičius, for the collected and shared information!

Interview with the owner of the apartment