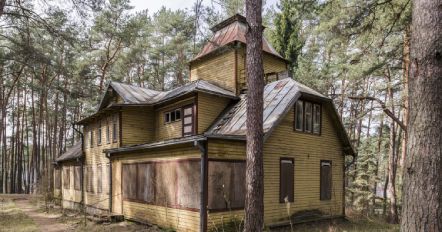 High above Jonas Biliūnas Square, in the pine forest, stands abandoned summerhouse of Teklė Dambravičienė – it was one of the earliest villas in the newly established Kačerginė resort. In general, this landlord is considered to be one of the founders of the resort of Kačerginė. Around 1920 she bought a big plot of land and began to build first cottages for rent.

A plan of the building designed by E. Frykas during 1920s. Source: Lithuanian Central State Archives.

This beautiful and probably the largest summer house of the resort was designed in 1920s by the famous Lithuanian architect E. Frykas. It was built in 1929. After the war, the building was nationalized and transferred to the Academy of Agriculture, later Vytautas Magnus University.