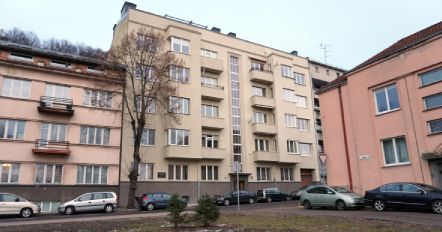 A cooperative formed for the purpose of building residential house

During the interwar period in Kaunas, it became common for representatives of the same profession to gather for the construction of large residential houses. Here they not only settled with their families, but also used these apartments for their individual practice or work. This is how part of modern apartment buildings have emerged. This one was no exception. The highest-ranking officials of the Supreme Tribunal of Lithuania established one of the first apartment construction cooperatives, calling it simply “Butas” (a Flat). In 1932, away from the noisy city center (the street was still under construction here), the community built a house where they could not only live but also work – the layout of the apartments allowed them to receive clients without disturbing family life. It is interesting that not only its architect Jonas Kriščiukaitis himself, but also his brother Kazys, as well as a member of the cooperative, a famous public figure Antanas Kriščiukaitis (Aišbė) – a writer, researcher, first chairman of the Supreme Tribunal, lived here.

Another famous resident of this house was Liudas Ciplijauskas. He was not only a lawyer, but also an active public figure – he participated in the activities of various societies and public movements, and was a patron. In interwar Lithuania (1930–1936), the largest charity project lasting 6 years was implemented. Its goal was to raise a million litas for a unique monument – the National Museum, that could be used by many generations of Lithuanians. Thus, in commemoration of the 500th anniversary of the death of Vytautas the Great, it was planned to build a Museum of Culture in his name in the temporary capital of Kaunas. Among the patrons there was also the name of L. Ciplijauskas.

A residential house with “thermometer”

While the reinforced concrete construction was still completely new in Lithuania, the buildings built in this way often received public attention – at the same time, when the reinforced concrete building of the “Pienocentras” company began to rise, passers-by on Laisvės avenue were very surprised and called it the “American construction”. The house of the company “Butas” also stood out with its modernity – such houses of minimalist, clean and modern forms were still a rarity in the temporary capital. By the way, did you know how Poles are calling such high and narrow staircase windows of such modernist apartment buildings? Thermometers!