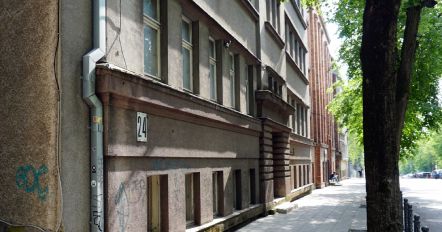 House of the owner of the busses

In the 1930s, Kaunas city authorities decided to change the management of bus services. The consequence of this decision was the establishment of a municipal bus transport company in 1934, which took over part of the passenger transport in the city. The rest was entrusted to servicing private bus “keepers” until the municipality provided its own buses. One of them was Lionginas Juknevičius, with whom a contract was concluded for 5 buses on 2 routes. Passengers were transported by “MAN” and “Renault” buses.

The seemingly very conservative building was designed by Stanislovas Bukovskis, a graduate of Vytautas Magnus University, who has “hidden” many architectural surprises in this residential house. One of the most characteristic features of Kaunas architecture is the duality of the building’s facades, which manifests itself in the interaction of tradition and new fashions. This is especially striking in this building as well – a house with a seemingly boring façade would surprise anyone who enters the courtyard. There you can see a completely different concept of restrained expressiveness.

Much neglected and poorly maintained, today the building still hides plenty of surviving authentic interior details that testify to us about the everyday life of that time, the quality of the products and the design trends.