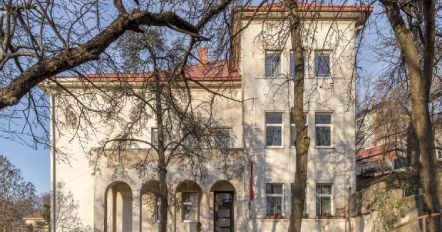 On the beautiful Žaliakalnis slope, near the stairway to the city , the famous architect Kudokas built himself a house. Here, for the first time, he put in the loggias (galleries) so popular in Italy where he had studied and which soon became popular with other designers and clients. The house has been “grown into” the slope. The main facade was decorated with Motherhood, a sculture by Bronius Pundzius placed into an arched niche. The architect`s apartment took up the entire second floor and part of the first. Near the entry to the latter the architect had his study. The roof of the house was flat: it had a terrace for enjoying a view of the city.