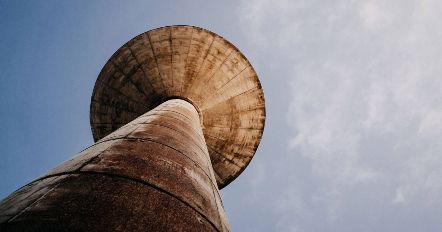 Highlights of the urban areas

A water tower is an engineering structure – part of a water supply system – the main part of which is a water tank raised at a certain height. The reservoir is designed to store and use water supplies during peak water demand, also raised water creates pressure in the water system.

There are 8 water supply towers in Lithuania counted as heritage objects. These are structures built in the interwar period or earlier. Most of the later ones were built during the Soviet era. They were built of various materials: metals, reinforced concrete, bricks. The height of the water towers is variable: in rural areas, metal towers of 10 to 25 m are common, while in urban areas, reinforced concrete towers of up to 50 m can be found.

Water towers are still dominating the cityscapes of many urban areas. Nevertheless, today their destinies are different: some of them are still functioning as they were originally intended, or serves as viewpoints and the place for communication systems, others are demolished as redundant structures. But also, various initiatives are emerging that offers creative insights.

Water tower as an opportunity

Creatively transformed water towers for years have been highlights of many cities in the US, Australia and Europe. It is gratifying that these tendencies do not overtake Lithuania either. There is already a climbing center on the tower in Jonava, and the towers in Kretinga are planned to be used as reflections of the city image.

In 2019 the community of Akademija in Kaunas District became a part of the Kaunas 2022 project and for half a year zealously collected memories and stories of residents about their town. During this process, it turned out that most people feel great sentiment for the 11th (Marvos) Fort, where there was a beach, it was customary to spend time with families or fall in love. After long debates, a need to rethink the sense of place appeared and to encourage people to come back here. The artistic tool – an interactive installation of light lasers – was chosen for this purpose. It was created by artists Linas Kutavičius and Linas Ramanauskas together with the community. These lasers turned the huge water tower into a modern lighthouse, not only for the community, but also for guests, inviting them to gather in a memorable place. This light installation can still be seen at the end of the day, in the dark.

This tower also attracted attention several years ago. In 2018 The water tower of Akademija became a place for a national flag. The initiative was implemented by “Kauno vandenys” (water supply company) and its employees to commemorate the centenary of the restored independent state of Lithuania.